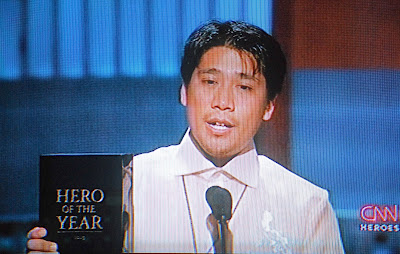 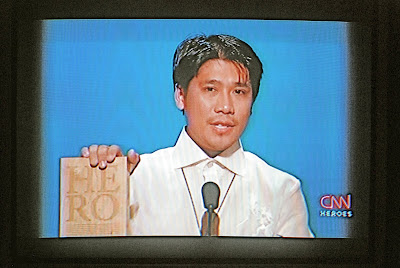 Efren Penaflorida, the "pushcart educator" from the Philippines, CNN Hero of 2009

This Thanksgiving night, CNN aired a gala event honoring the top ten CNN Heroes of 2009, everyday people that make a difference. Hosted by Anderson Cooper, the all-star tribute was held last Saturday night at the Kodak Theatre in Hollywood. Efren Peñaflorida, who started an outdoor "pushcart classroom" in the Philippines to bring education to poor children, has been named the 2009 CNN Hero of the Year. He emerged as the winner after seven weeks of online voting at CNN.com. He received $100,000 to continue his work with the Dynamic Teen Company, a foundation that he started at the age of 16.

"Our planet is filled with heroes, young and old, rich and poor, man, woman of different colors, shapes and sizes. We are one great tapestry," Peñaflorida said upon accepting the honor. "Each person has a hidden hero within, you just have to look inside you and search it in your heart, and be the hero to the next one in need. So to each and every person inside this theater and for those who are watching at home, the hero in you is waiting to be unleashed. Serve, serve well, serve others above yourself and be happy to serve. As I always tell to my co-volunteers ... you are the change that you dream, as I am the change that I dream, and collectively we are the change that this world needs to be."