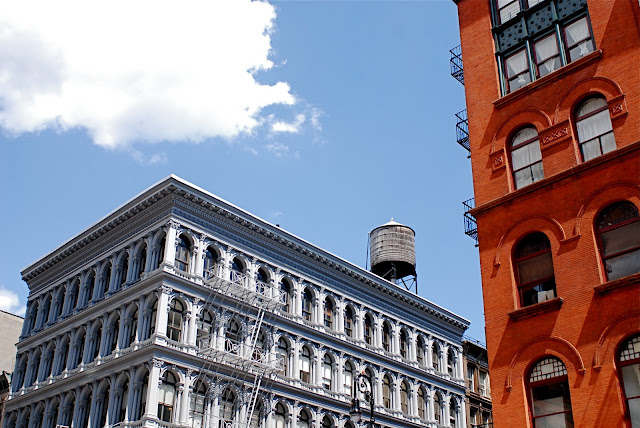 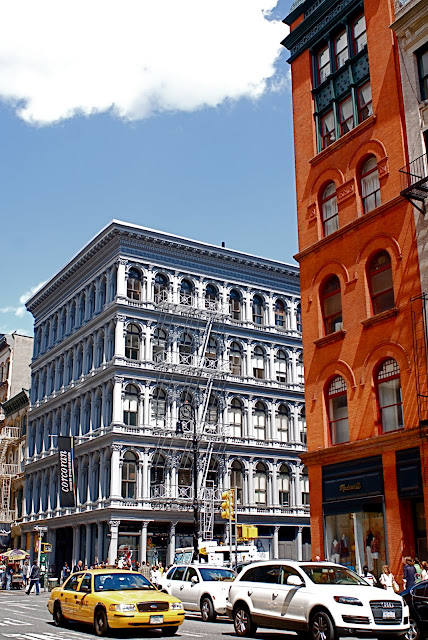 The E.V. Haughwout Building (building on the left) in SoHo was a symbol of cast iron’s innovative use. Built in roughly a year’s time, it was home to what The New York Times called “the greatest china and porcelain house in the city.”
More importantly, when the Haughwout Building opened in 1857, it showcased the New York City’s first passenger safety elevator. Created by the founder of Otis Elevators, this building feature enabled store patrons to go from floor-to-floor with speed and efficiency. Best of all, the elevator enabled shoppers to carry more parcels with them, making it easier to spend more money in one location. (from SoHo lofts.com)
SoHo is also known as the SoHo-Cast Iron Historic District because of the many buildings incorporating cast iron architectural elements like the building in the picture. SoHo is a neighborhood bounded roughly by Houston Street on the northern side, Lafayette Street/Centre Street on the east, Canal Street on the south, and West Broadway on the west, based on SoHo's unique M1-5a/M1-5b zoning passed in 1971.Originally ending in the west at the eastern side of West Broadway and to the east at the western side of Crosby Street, the SoHo-Cast Iron Historic District was expanded in 2010 to cover most of West Broadway and to extend east to Lafayette/Centre Streets. The lines are not straight, and some block-fronts on West Broadway and Lafayette are excluded from the Historic District. SoHo boasts the greatest collection of cast-iron architecture in the world. Approximately 250 cast iron buildings stand in New York City and the majority of them are in SoHo. Cast iron was initially used as a decorative front over a pre-existing building. With the addition of modern, decorative facades, older industrial buildings were able to attract new commercial clients. Most of these facades were constructed during the period from 1840 to 1880. In addition to revitalizing older structures, buildings in SoHo were later designed to feature the cast iron. An American architectural innovation, cast iron was cheaper to use for facades than materials such as stone or brick. Molds of ornamentation, prefabricated in foundries, were used interchangeably for many buildings, and a broken piece could be easily recast. The buildings could be erected quickly, some were built in only four months' time. Despite the brief construction period, the quality of the cast iron designs was not sacrificed. Previously, bronze had been the metal most frequently used for architectural detail. Architects now found that the relatively inexpensive cast iron could form the most intricately designed patterns. Classical French and Italian architectural designs were often used as models for these facades. And because stone was the material associated with architectural masterpieces, cast iron, painted in neutral tints such as beige, was used to simulate stone.
Since the iron was pliable and easily molded, sumptuously curved window frames were created, and the strength of the metal allowed these frames considerable height. Thus, the once somber, gas-lit interiors of the industrial district were flooded with sunlight through the newly enlarged windows. The strength of the cast iron permitted high ceilings with sleek supporting columns, and interiors became more expansive and functional.
During cast iron's heyday, many architects thought it to be structurally more sound than steel. It was also thought that cast iron would be fire resistant, and facades were constructed over many interiors built of wood and other flammable materials. But, when exposed to heat, cast iron buckled and later cracked under the cold water used to extinguish fire. In 1899, a building code was passed mandating the backing of cast iron fronts with masonry. Most of the buildings which stand today are constructed in this way. It was the advent of steel as a major construction material that brought a rapid end to the cast iron era."
Posted by Noel Y. C. at 11:14 AM