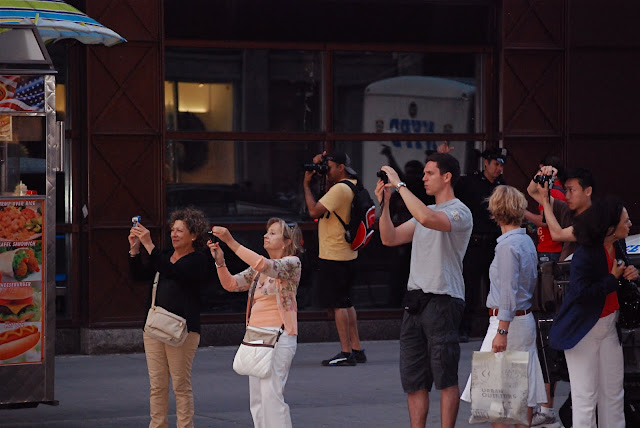 Four times a year, the sun sets in perfect alignment with the east-west streets of the primary sections of New York City's Manhattan street grid. Astrophysicist Neil deGrasse Tyson, the Director of the Hayden Planetarium of the American Museum of Natural History named the urban phenomenon MANHATTANHENGE, Manhattan's version of Stonehenge. These images were taken yeserday at 42nd Street near Broadway.

Tyson, (who also tweets,) explains Manhattanhenge on his website: As you may know, had Manhattan’s grid been perfectly aligned with the geographic north-south line, then the days of Manhattanhenge would be the spring and autumn equinoxes, the only two days on the calendar when the Sun rises due-east and sets due-west. But Manhattan’s street grid is rotated 30 degrees east from geographic north, shifting the days of alignment elsewhere into the calendar.
Note that any city crossed by a rectangular grid can identify days where the setting Sun aligns with their streets. But a closer look at such cities around the world shows them to be less than ideal for this purpose. Beyond the grid you need a clear view to the horizon, as we have over New Jersey. And tall buildings that line the streets create a kind of brick and steel channel to frame the setting Sun, creating a striking photographic opportunity. What will future civilizations think of Manhattan Island when they dig it up and find a carefully laid out network of streets and avenues? Surely the grid would be presumed to have astronomical significance, just as we have found for the pre-historic circle of large vertical rocks known as Stonehenge, in the Salisbury Plain of England. For Stonehenge, the special day is the summer solstice, when the Sun rises in perfect alignment with several of the stones, signaling the change of season.
Posted by Noel Y. C. at 5:51 AM