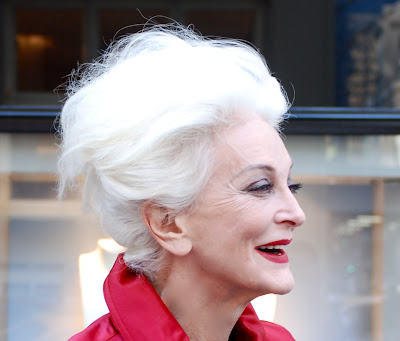 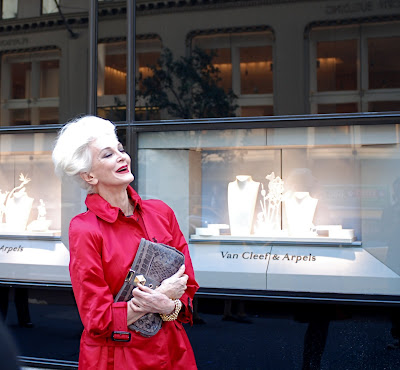 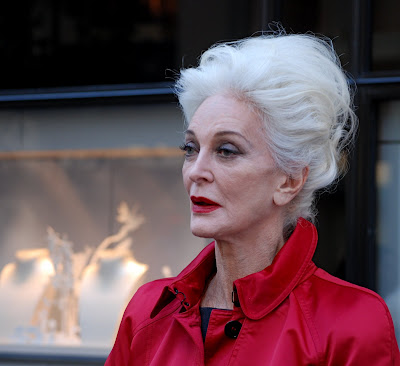 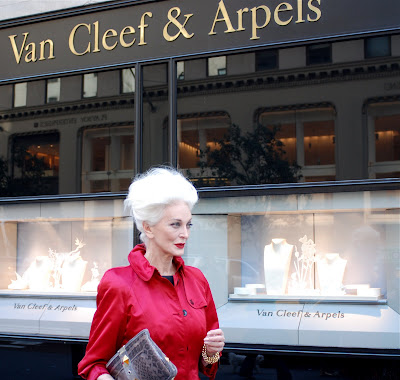 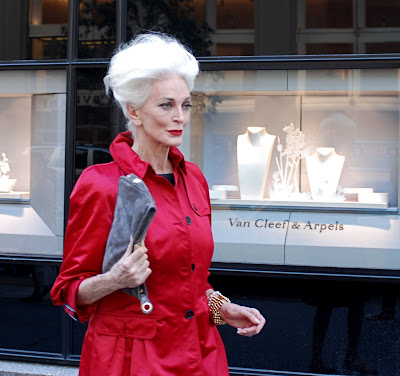 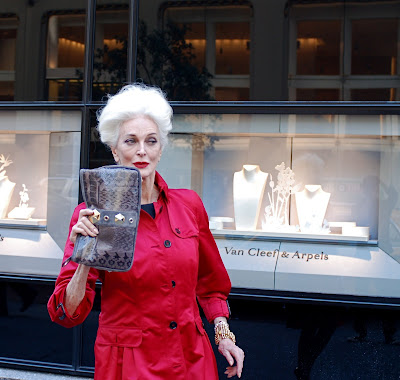 Last Sunday, I joined a slew of shutterbugs that photographed CARMEN DELL'OREFICE outside Van Cleef & Arpels on Fifth Avenue. At 76, the American model and catwalk veteran is beautiful, flawless and elegant. CARMEN DELL'OREFICE (born June 3, 1931) has been called the first supermodel; though, in fact, she has simply worked steadily since her teens, when she was first photographed for Vogue, to the present day. She is unusual in that she has had a continuous career in a field in which few people work past the age of 30. As of 2008, she has been modeling for 60 years. She was discovered on a bus heading back from a dance class by a woman who was married to a photographer at Harper's Bazaar in 1941. Her first pictures taken by Erwin Blumfeld in 1945 (when she was just 14) led to a contract with American Vogue, where she went on to appear on 6 front covers. She first appeared on the cover of Vogue at age 15.
Dell'Orefice's striking, high-cheekboned and elegant features have been captured by many top photographers, including Irving Penn, Richard Avedon, Cecil Beaton and Horst P. Horst; she is said to have acted as a muse to artists Salvadore Dali and Donald Cammell. Carmen adapted and wrote a best selling book in 1985 and appeared on cameo roles in films such as Woody Allen's "The curse of the Jade Scorpion" and Martin Scorsese's "The Age of Innocence."
Posted by Noel Y. C. at 4:00 AM

OMG what a beautiful, classy woman....

I just watched the case with Berney and how her life savings were gone. Couldn't believe it. She is a real role model and I admire her posture, class, and strength; it's something all women should strive for, not like most of today's shallow and cold top models.

Carmen simply gets more beautiful with age, and that's something nobody can take away from her. Stay strong, girl.

Carmen would not remember me, but I met her at several social functions in NYC in the 70s & 80s. She is as warm and kind as she is physically beautiful. Our thoughts are with you in this stressful time, lovely lady. You deserve only a successful turn around. Be well.

She is absolutely beautiful!
Class is forever.
Thanks for sharing.
Cata