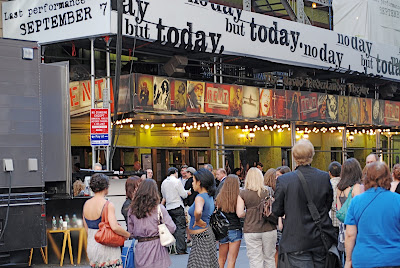 Yesterday, September 7th, fans of the Tony Award-winning Broadway musical, RENT flocked to the Nederlander Theatre where the show played its final performance, 12 years after it opened. Rent is the landmark Broadway musical that melded a rock sound with story and character like no other musical before it. At its close, the Pulitzer Prize-winning and Tony Award-winning musical by the late lyricist-librettist-composer Jonathan Larson will have played 5,124 performances and 16 previews. Playbill’s July 2008 list of longest-running shows in Broadway history had “Rent” at No. 7, still about 300 performances behind “Beauty and the Beast,” which closed in 2007.
Here are the standings for number of performances of current and former Broadway shows as of July 20, 2008. All totals are for the original Broadway run, except where otherwise noted. Shows marked with an asterisk (*) are still running.
* "The Phantom of the Opera" 8519
"Cats" 7485
"Les Misérables" 6680
"A Chorus Line" 6137
"Oh! Calcutta!" (Revival) 5959
"Beauty and the Beast" 5461 (closed 7/29/07) *
"Rent" 5083 *
"Chicago" (Revival) 4836 *
"The Lion King" 4468
"Miss Saigon" 4097
From Playbill.com
Critics and fans observed that what made the show so groundbreaking was not its use of a current pop sound (Hair, Dreamgirls and Promises, Promises had done that before), but the intricacy and depth of the marriage between music, lyric, character and message. Larson, who famously and tragically died at age 35 of heart disease linked to Marfan Syndrome — on Jan. 25, 1996, the day before the show's first preview Off-Broadway — used Puccini's opera La Bohème as a jumping-off point for his own 1990s-set show about lovers and artists struggling to connect in the age of AIDS. Sex, death, prejudice, artistic expression, media, celebrity, selling out, friendship, existential angst — and "how about love?," as one lyric goes — are among ideas in the musical, directed by Michael Greif on designer Paul Clay's spare and utilitarian set. Greif's directing career blossomed following Rent's 1996 Off-Broadway bow, the Broadway transfer and its international success. He would revisit the show and help maintain its quality throughout its Broadway life. Members of the original cast — showbiz nobodies, for the most part — found themselves in a national spotlight (on the Tonys, on the cover of Newsweek, in gossip columns) and their careers were made.
Daphne Rubin-Vega and Adam Pascal were nominated for acting Tonys for their work as HIV-infected lovers and artists Mimi (an exotic dancer who likes the night life, seeking to go "Out Tonight") and Roger (a rock singer-songwriter aching to have "One Song Glory"). He would later star in Broadway's Aida and as a replacement Emcee in Cabaret, and she was cast in the revivals of Les Misérables and The Rocky Horror Show and was again Tony-nommed for her turn in Anna in the Tropics. Both also have pop singing careers, as do other original cast members. The original cast also included breakout players Anthony Rapp (who later starred in Broadway's You're a Good Man, Charlie Brown and is now appearing in his own Rent-inspired stage memoir, Without You, based on his book) as Mark, Taye Diggs (who snagged TV deals in recent years) as Benny, Idina Menzel (who married Diggs, and later won a Tony as Elphaba in Wicked) as Maureen), Jesse L. Martin (who later landed a life-changing job on TV's "Law & Order") as Tom Collins, plus principals Wilson Jermaine Heredia as Tom's lover, Angel, and Fredi Walker as Joanne, Maureen's lover. Heredia was the one actor to win the Tony for his performance.
Posted by Noel Y. C. at 3:50 AM