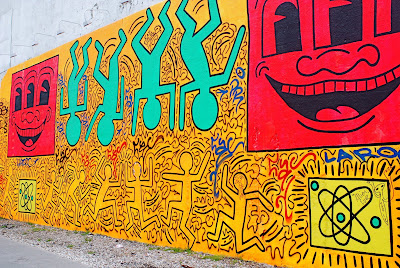 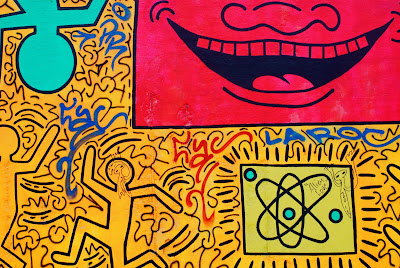 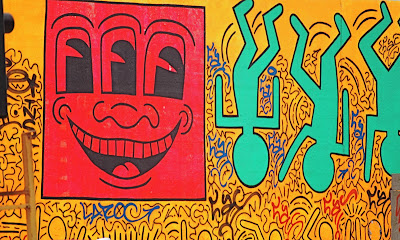 These are photos of the recreation of the late artist KEITH HARING’s celebrated Houston Street and Bowery mural. The mural became an instant downtown landmark after Keith painted it in the summer of 1982. The mural was up for only a few months in the summer of 1982 before it was painted out but its image remains imprinted in the memory of many people who were part of the downtown artist community in the early 1980s. The mural was repainted by Gotham Scenic using the extensive photographic documentation of the original work. The work was unveiled on May 4, 2008 the day that would have been Keith Haring’s 50th Birthday.
Keith Haring (May 4, 1958 – February 16, 1990) was an artist and social activist whose work responded to the New York City street culture of the 1980s. Born in Reading, Pennsylvania, Haring grew up in Kutztown and was interested in art from an early age. From 1976 to 1978 he studied graphic design at The Ivy School of Professional Art, a commercial and fine art school in Pittsburgh. At age 19 Haring, who was openly gay, moved to New York City, where he was inspired by graffiti art, and studied at the School of Visual Arts. The Keith Haring Foundation was established in 1989 to assist AIDS-related and children's charities, and maintains the largest resource of archives on Keith Haring. Haring's bold lines and active figures carry poignant messages of vitality and unity. His legacy made an impact on late 20th century art and grants us all a vision for the future.
Posted by Noel Y. C. at 7:27 PM