VAN GOGH and the Colors of the Night 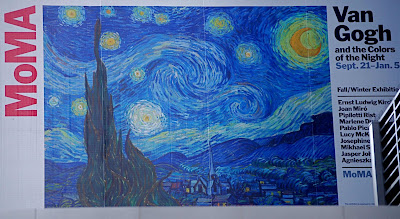 Photo of the advertisement on the side of the MOMA building 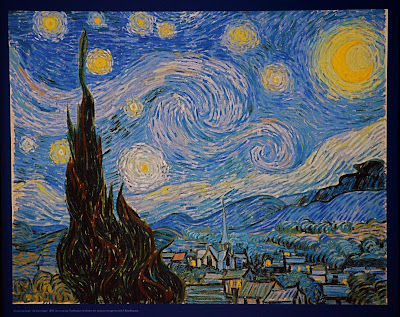 Photo of the sidewalk billboard at the entrance ("A Starry Night") 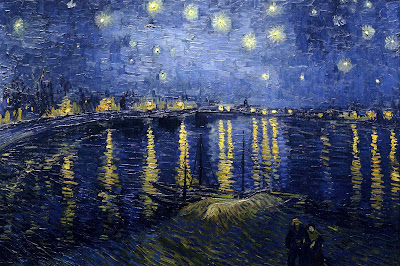 "Starry Night Over the Rhone"
Image from Wikipedia
Earlier today, I finally got to see the new exhibit called VAN GOGH AND THE COLORS OF THE NIGHT at the MUSEUM OF MODERN ART. The exhibit features paintings where Van Gogh utilized color to translate light effects at night. My personal favorite is STARRY NIGHT OVER THE RHONE (picture above from Wikipedia). The challenge of painting at night intrigued Van Gogh. The vantage point he chose for Starry Night Over the Rhone allowed him to capture the reflections of the gas lighting in Arles across the glimmering blue water of the Rhône. The sky is illuminated by the constellation Ursa Major (the Great Bear). In the foreground, two lovers stroll by the banks of the river.The exhibit runs through January 5, 2009.
From the MOMA website:
Throughout his career, Vincent van Gogh (Dutch, 1853–1890) attempted the paradoxical task of representing night by light. His procedure followed the trend set by the Impressionists of "translating" visual light effects with various color combinations. At the same time, this concern was grafted onto Van Gogh's desire to interweave the visual and the metaphorical in order to produce fresh and deeply original works of art. These different artistic concerns found themselves powerfully bound together in Van Gogh's nocturnal and twilight paintings and drawings. This exhibition will present new insight into Van Gogh's depictions of night landscapes, interior scenes, and the effects of both gaslight and natural light on their surroundings. Representing all periods of the artist's career, the exhibition will comprise over two dozen works of superlative quality—several of which have never been seen together, even though they were very clearly conceived with each other in mind. This exhibition will be shown at the Van Gogh Museum in Amsterdam, February 13–June 7, 2009. It will be accompanied by a fully illustrated catalogue.
Posted by Noel Y. C. at 3:52 PM