ALEXANDER CALDER at the WHITNEY MUSEUM 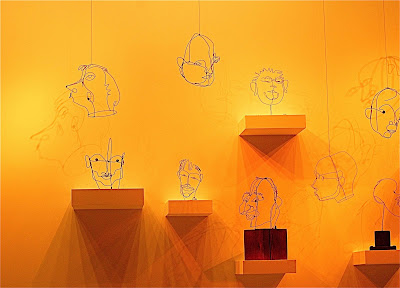 On view at the WHITNEY MUSEUM are the works of ALEXANDER CALDER. Among the displayed works of art, I found Calder's wire portraits most fascinating. The exhibit runs through February 15, 2009. The Whitney Museum is located at 945 Madison Avenue (Madison Avenue and 75th Street).
From the official website:
"For decades [Calder's] Circus, lent by the artist in 1970 to the Whitney Museum of American Art, has set flight to the imaginations of visiting children and adults. Now the museum is celebrating its genesis in "Alexander Calder: The Paris Years, 1926-1933," an exhibition opening on Thursday that brings the young Calder and the giddy ferment of his artistic circle to life."
--The New York Times, October 12, 2008
When Alexander "Sandy" Calder (1898–1976), arrived in Paris in 1926, he aspired to be a painter; when he left in 1933, he had evolved into the artist we know today: an international figure and defining force in twentieth-century sculpture. In these seven years Calder's fluid, animating drawn line transformed from two dimensions to three, from ink and paint to wire, and his radical innovations included openform wire caricature portraits, a bestiary of wire animals, his beloved and critically important miniature Circus (1926–31), abstract and figurative sculptures, and his paradigm-shifting "mobiles."
The Whitney has the largest body of work by Alexander Calder in any museum and is proud to be the exclusive American venue for this landmark exhibition, co-organized with the Centre Pompidou.
Posted by Noel Y. C. at 7:16 PM