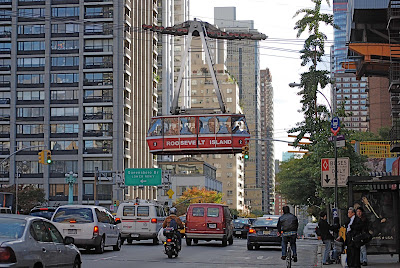 One of the little things that I've always wanted to do while living in this city is to take the Roosevelt Island Tramway. I captured this image on Second Avenue, not far from where I live.
From wikipedia:
The Roosevelt Island Tramway is an aerial tramway in New York City that spans the East River and connects Roosevelt Island to Manhattan. Prior to the completion of the Portland Aerial Tram in December 2006, it was the only commuter aerial tramway in North America. Over 26 million passengers have used the tram since it began operation in 1976. Each cabin has a capacity of up to 125 people and makes approximately 115 trips per day. The tram moves at about 16 mph (26 km/h) and travels 3,100 feet (940 m) in 4.5 minutes. At its peak it climbs to 250 feet (76 m) above the East River as it follows its route on the north side of the Queensboro Bridge, providing views of the East Side of midtown Manhattan. Two cabins make the run at fifteen minute intervals from 6:00 a.m. to 2:30 a.m. (3:30 a.m. on weekends) and continuously during rush hours.
The tram is operated by Interfac on behalf of the Roosevelt Island Operating Corporation of the State of New York, a state public benefit corporation created in 1984 to run services on the island.
The tramway was featured prominently in a climactic battle in the 2002 film Spider-Man. The Spider-Man film was not the first appearance of the tramway; The House on the Edge of the Park (1980) shows the tram at 6:07 minutes into the film as how it appeared in the late 1970s. The Sylvester Stallone thriller Nighthawks (1981) depicted the tramway as a terrorist target where United Nations delegates were taken hostage. It was used in the opening credits of City Slickers II: The Legend of Curly's Gold (1994). In the 1994 film Léon (The Professional) it can be seen when Natalie Portman's character, Mathilda, is traveling on it alone. It also appeared in the 2005 horror movie Dark Water. In the comic Kingdom Come, the climactic battle of Volume 1 takes place on and around a similar system in downtown Metropolis.
Posted by Noel Y. C. at 2:39 AM

If you are that close to the Tram there is no reason one evening on your way not to take a quick trip across and see the City from an angle that few can hope to see it. On a clear night the lights are amazing. Consider this a formal invitation to see Manhattan from across and over the East River.