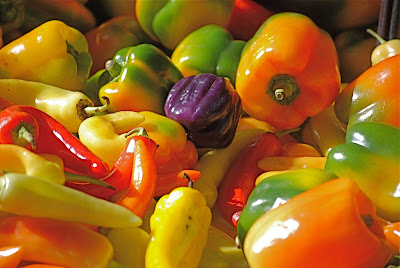 The last time I visited the Union Square Farmers' Market, I made this image of gorgeous and colorful bell pepper, including a rare purple variety. This beautiful purple bell pepper begins as emerald green and mature to a stunning eggplant purple in color. Purple Beauty is the best open pollinated purple bell pepper on the seed market due to its beauty, reliability, high yield and disease resistance. This bell pepper variety is resistant to TMV (Tobacco MosaicVirus) and is very easy to grow in virtually any climate. The peppers are produced in great numbers on compact bushy plants reaching approximately 45 centimeters in height. The peppers are produced, not only the crown of the plant, but also on each limb of the pepper plant. Having very thick, meaty walls, this bell pepper is ideal for slicing, stir fry or adding color to salads.
From wikipedia:
Bell pepper is a cultivar group of the species Capsicum annuum. Cultivars of the plant produce peppercorns which develop into fruits in different colors, including red, yellow, green and orange. Bell peppers are sometimes grouped with less pungent pepper varieties as "sweet peppers". Peppers are native to Mexico, Central America and northern South America. Pepper seeds were later carried to Spain in 1493 and from there spread to other European and Asian countries. Today, Mexico remains one of the major pepper producers in the world. The color depends on when they are harvested and the specific cultivar. Green peppers are less sweet and slightly more bitter than red, yellow or orange peppers. The taste of ripe peppers can also vary with growing conditions and post-harvest storage treatment; the sweetest are fruit allowed to ripen fully on the plant in full sunshine, while fruit harvested green and after-ripened in storage are less sweet.
The Union Square farmers' market is held every Monday, Wednesday, Friday and Saturday from 8 AM to 6 PM. Saturdays are the busiest day of the four. The market is served by a number of farmers in the New England area. During peak seasons, the market serves more than 250,000 customers per week. More than 1,000 varieties of fruits and vegetables can be found at the market.
Posted by Noel Y. C. at 3:37 AM