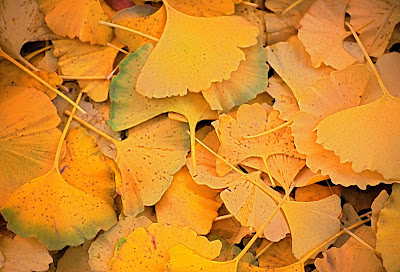 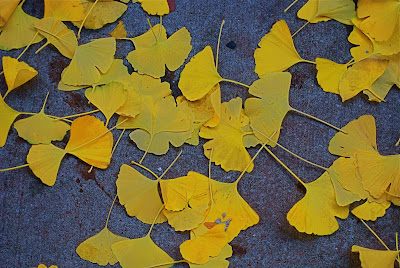 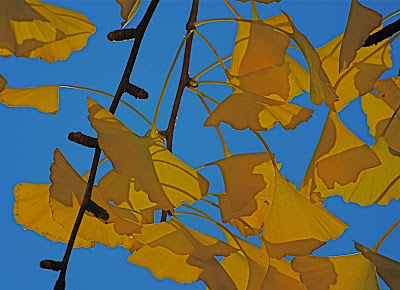 Some streets in Manhattan are lined by different kinds of trees such as Ginkgo biloba. These are images of the ginkgo leaves which turn bright yellow in the Fall, taken on the Upper Westside.
From Wikipedia:
Ginkgo (Ginkgo biloba; in Chinese 銀杏, pinyin romanization, yín xìng), frequently misspelled as "Gingko", and also known as the Maidenhair Tree after Adiantum, is a unique species of tree with no close living relatives. The ginkgo is classified in its own division, the Ginkgophyta, comprising the single class Ginkgoopsida, order Ginkgoales, family Ginkgoaceae, genus Ginkgo and is the only extant species within this group. During autumn, the leaves turn a bright yellow, then fall, sometimes within a short space of time (1–15 days). A 2004 conference paper summarizes how various trials indicate that Ginkgo shows promise in the treatment of Alzheimer's disease, though a 2008 study found it ineffective at treating dementia.
Posted by Noel Y. C. at 2:39 PM