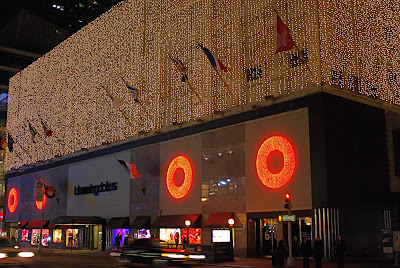 Bloomingdales at Third Avenue between 59th and 60th Streets 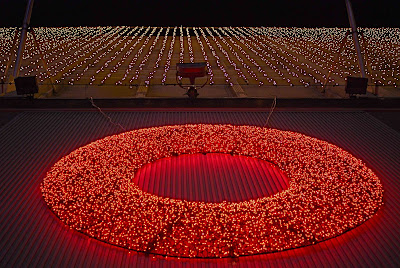 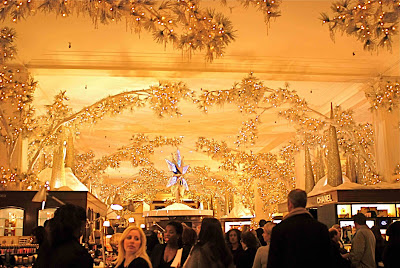 Shoppers at Saks Fifth Avenue
From wikipedia:
Black Friday is the Friday after Thanksgiving in the United States, where it is the beginning of the traditional Christmas shopping season. Because Thanksgiving falls on the fourth Thursday in November in the United States, Black Friday occurs between the 23rd and the 29th of November.
Black Friday is not an official holiday, but many employees have the day off, which increases the number of potential shoppers. Retailers often decorate for the Christmas season weeks beforehand. Many retailers open very early (typically 5 am or even earlier) and offer doorbuster deals and loss leaders to draw people to their stores. Although Black Friday, as the first shopping day after Thanksgiving, has served as the unofficial beginning of the Christmas season at least since the start of the modern Macy's Thanksgiving Day Parade in 1924, the term "Black Friday" has been traced back only to the 1960s.
The term "Black Friday" originated in Philadelphia in reference to the heavy traffic on that day. (see Origin of the name below) More recently, merchants and the media have used it instead to refer to the beginning of the period in which retailers are in the black (i.e., turning a profit).
The news media frequently refer to Black Friday as the busiest retail shopping day of the year, but this is not always accurate. While it has been one of the busiest days in terms of customer traffic, in terms of actual sales volume, from 1993 through 2001 Black Friday was usually the fifth to tenth busiest day. In 2002 and 2004, however, Black Friday ranked second place, and in 2003 and 2005, Black Friday actually did reach first place. The busiest retail shopping day of the year in the United States (in terms of both sales and customer traffic) usually has been the Saturday before Christmas.
In many cities it is not uncommon to see shoppers lined up hours before stores with big sales open. Once inside, the stores shoppers often rush and grab, as many stores have only a few of the big draw items. Often many fatalities may occur in the process. In 2008, a worker at a Wal-Mart on Long Island, New York was apparently trampled to death by shoppers just minutes after the store's opening at 5:00 am; a pregnant mother was hospitalized and claimed miscarriage from injuries in the same human "stampede". There even one case in Palm Springs, Calfornia in which two people shot each other at a Toys R Us to obtain an item.
Electronics and popular toys are often the most sought-after items and may be sharply discounted. Because of the shoulder-to-shoulder crowds, many choose to stay home and avoid the hectic shopping experience. The local media often will cover the event, mentioning how early the shoppers began lining up at various stores and providing video of the shoppers standing in line and later leaving with their purchased items. Traditionally Black Friday sales were intended for those shopping for Christmas gifts. For some particularly popular items, some people shop at these sales in order to get deep discounts on items they can then resell, typically online.
Posted by Noel Y. C. at 9:22 PM