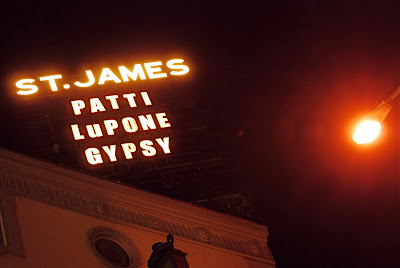 PATTI LUPONE's name in lights at the St. James Theater on 44th Street 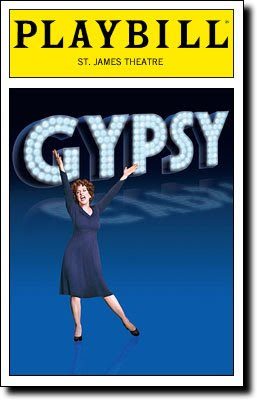 Last night, we attended a performance of the new revival of GYPSY starring the legendary PATTI LUPONE as Mama Rose in GYPSY. Ms. Lupone won a Tony Award for Best Performance by a leading actress in a musical this year. She was marvelous! For some reason I liked this production much better than the last revival with Bernadette Peters. Playbill.com reports that Gypsy will end its run at the St. James Theatre March 1, 2009, at the conclusion of LuPone's original contract.
From Playbill.com:
Directed by the musical's librettist, Arthur Laurents, Gypsy will have played 388 performances and 27 previews when it closes. Following an acclaimed run at City Center, Gypsy began previews on Broadway March 3, 2008, with an official opening March 27, 2008. In a statement lead producer Roger Berlind said, "I know I speak on behalf of my partners when I say that this production has been one of the most gratifying endeavors of our professional careers. Legendary director Arthur Laurents assembled a superb company lead by the incomparable Patti LuPone. And, while we wish Gypsy could entertain us all much longer, it has become clear to us that there is no way to replace the irreplaceable." A consummate show-biz musical suggested by the memoirs of stripper Gypsy Rose Lee. She was once just plain Louise, the awkward daughter of an unstoppably ambitious stage mother. When her pretty sister runs away from the family's minor vaudeville act, Louise tries to fulfill her mother's dreams. But it's not until trouping with Mama dwindles to appearing in burlesque, that Louise finally finds pleasure in the spotlight. The vibrant score includes “Some People,” “Let Me Entertain You,” “Together,” “Everything's Coming Up Roses” and “Rose's Turn.”
Review from the New York Times (Ben Brantley):
Watch out, New York. Patti LuPone has found her focus. And when Ms. LuPone is truly focused, she’s a laser, she incinerates. Especially when she’s playing someone as dangerously obsessed as Momma Rose in the wallop-packing revival of the musical “Gypsy,” which opened on Thursday night at the St. James Theater.
Watching that balance shift is a source of wonder, amusement and even pity and terror. If in the Encores! version of “Gypsy,” Ms. LuPone seemed to be trying on and discarding different aspects of Rose as if they were party hats, she has now settled on a single, highly disciplined interpretation that combines explosively contradictory elements into a single, deceptively ordinary-looking package.
It’s as if the new wig she wears here — a ’30s-style mop of recalcitrant curls that is a vast improvement on her blunt bowl cut of last summer — had forced her to internalize her many ideas about what makes Rose run. And while Rose may be a dauntingly single-minded creature, Ms. LuPone now plays her less on one note than any actress I’ve seen.
This Rose begins as a busy, energetic, excited woman, and you can’t help being infected by her liveliness. You understand why Herbie would be smitten with her, and for once, his description of her as looking “like a pioneer woman without a frontier” fits perfectly. But every so often a darker, creepier willpower erupts, as involuntary as a hiccup.
In Rose’s two great curtain numbers, “Everything’s Coming Up Roses” and “Rose’s Turn,” the darkness takes over so completely that you feel that you’re watching a woman who has been peeled down to her unadorned id. In “Rose’s Turn,” in particular, Ms. LuPone takes you on a guided tour of all Rose’s inner demons, from sexual succubus to shivering infant. (Be warned: they will live in your head for a while.)
A great Momma Rose is usually enough for a thoroughly compelling “Gypsy.” But this one has so much more. Mr. Laurents and his cast have applied the same careful analysis to all the major characters. As a result we become newly sensitized to “Gypsy” as a sad story of colliding desires, of people within an extended family vainly longing for love, for security, for recognition from one another. And this production makes us painfully aware of the toll exacted by repeatedly missed connections.
I have never, for example, seen a Herbie as palpably in love or in pain as the one the excellent Mr. Gaines provides.
When Ms. LuPone delivers “Rose’s Turn,” she’s building a bridge for an audience to walk right into one woman’s nervous breakdown. There is no separation at all between song and character, which is what happens in those uncommon moments when musicals reach upward to achieve their ideal reasons to be. This “Gypsy” spends much of its time in such intoxicating air.
Posted by Noel Y. C. at 5:17 AM