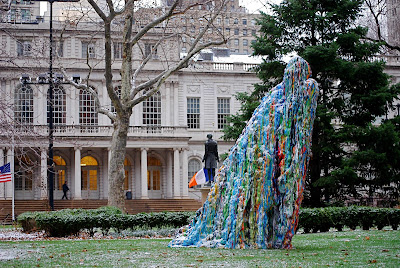 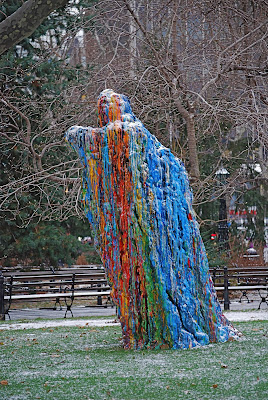 from The Public Art Fund website:
Through April 2009, Public Art Fund will present an exhibition of four large-scale figurative sculptures by New York-based artist Robert Melee at City Hall Park. Since 1978, Public Art Fund has presented 19 temporary exhibitions at this lower Manhattan location, including the work of Alexander Calder, Julian Opie and Roy Lichtenstein. The current exhibit by Robert Melee features immense forms that while amorphous and featureless, seem familiar in their generalized characteristics and poses - slouching, sitting, pointing, standing upright - but also retain a haunting sense of disguise and alluring somberness.
Robert Melee is known for producing works of art that explore human behavior and psychology. Throughout his career, which began in the early '90s, he has focused his attention on interaction and relationships as seen through characters, both real and invented in his film, photography and performances. Melee began creating figurative sculpture in 2005, and these four outdoor bronze sculptures, presented together for the first time, represent some of his most recent work. To construct these commanding forms, Melee starts with mannequins to establish the basic human figure, and then works to blur recognizable details with abstract forms by adding built armatures and covering most of the features with canvas and plaster. This sculpting method allows him to manipulate and re-shape the human form. He then casts the sculptures in bronze and employs his signature painting technique called "marbleizing," an obsessively exaggerated interpretation of classic marbleizing, in which he drips and splatters the sculptures with brightly colored enamel paint. The results are works of art that unite formal characteristics of painting and sculpture: three-dimensional objects with a surface-area that underscores the materiality of the paint. His process is evocative of such Abstract Expressionists as Jackson Pollack and Willem de Kooning, who became known for their expressive use of color applied through intense physical labor.
These sculptures may be viewed as suggestive of different stages of life - from infant to child to adult - as supported by their titles, It Sitting, It Standing, It Up and Her Leaving. The artist's choice of "It" in the titles refers to a non gender-specific figurative form and reminds us that the works are, in fact, generic featureless masses. This direction, which pushes the sculptures towards the grotesque, challenges the "idealized form" often represented in traditional figurative art.
Posted by Noel Y. C. at 8:07 PM