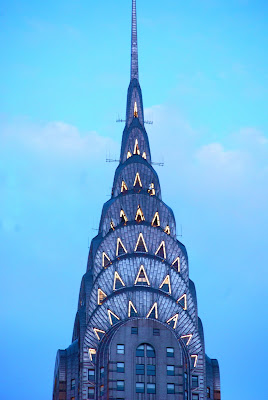 from Wikipedia:
The Chrysler Building is also well renowned and recognised for its terraced crown. Composed of seven radiating terraced arches, Van Alen's design of the crown is a cruciform groin vault constructed into seven concentric members with transitioning set-backs, mounted up one behind each other. The stainless-steel cladding is ribbed and riveted in a radiating pattern with many triangular vaulted windows, transitioning into smaller segments of the seven narrow set-backs of the facade of the terraced crown. The entire crown is clad with silvery "Enduro KA-2" metal, an austenitic stainless steel developed in Germany by Krupp and marketed under the trade name "Nirosta" (a German acronym for nichtrostender Stahl, meaning "rust-proof steel").
When the building first opened, it contained a public viewing gallery on the 71st floor, which was closed to the public in 1945. This floor is now the highest-occupied floor, most recently occupied by an office space management firm. The private Cloud Club occupied a three-floor high space from the 66th–68th floors, but closed in the late 1970s. Above the 71st floor, the stories of the building are designed mostly for exterior appearance, functioning mainly as landings for the stairway to the spire. Very narrow with low, sloped ceilings, these top stories are useful only for holding radio-broadcasting and other mechanical and electrical equipment. Television station WCBS-TV (Channel 2) originally transmitted from the top of the Chrysler in the 1940s and early 1950s, before moving to the Empire State Building. For many years, WPAT-FM and WTFM (now WKTU) also used the Chrysler Building as a transmission site, but they also moved to the Empire by the 1970s. There are currently no commercial broadcast stations located at the Chrysler Building.
Posted by Noel Y. C. at 7:11 PM