Broadway Dimmed Its Lights To Honor Richardson and Silver 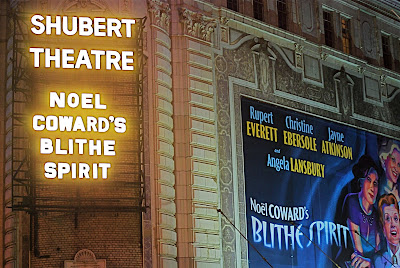 Video from the Associated Press
The marquees of Broadway theatres including the Sam S. Shubert above were dimmed earlier tonight at 8 PM for 1 minute to pay tribute to the late actress NATASHA RICHARDSON, and also last night to honor RON SILVER who passed on a few days ago.
Ms. Richardson, who met husband LIAM NEESON on Broadway in "Anna Christie," earned a Tony Award for her performance as Sally Bowles in the Sam Mendes-Rob Marshall revival of "Cabaret." The actress was also known for her work on Broadway in "Closer" and in the recent revival of "A Streetcar Named Desire."
Ron Silver, was an intense, versatile actor who won a Tony Award for his portrayal of an anxious film producer about to close a big deal in the original Broadway run of David Mamet's Hollywood satire, "Speed-the-Plow."
I took the photo above of the Sam S. Shubert Theatre marquee for BLITHE SPIRIT which opened recently, starring ANGELA LANSBURY, RUPERT EVERETT, CHRISTINE EBERSOLE and JAYNE ATKINSON.
Posted by Noel Y. C. at 6:59 PM