The New Look of the JUILLARD SCHOOL 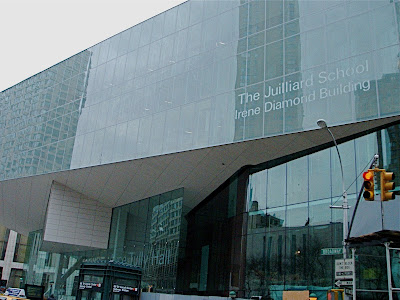 This is the newly renovated JUILLARD SCHOOL, New York's famous performing arts conservatory that trains in drama, dance and music. With about 800 undergraduate and graduate students, the school is consistently ranked among the top 2 or 3 most selective institutions of higher learning in North America. A three-storey high glass facade that looks on Broadway is the new face of Lincoln Center's Alice Tully Hall, which opened this week after a US$159-million, 22-month renovation - with great acoustics and African wooden walls that glow amber in the dark. The concert hall is inside a building that houses the Juilliard School, which has been expanded by 4,200 square meters, with more rehearsal and practice rooms for music, dance and theatre.
Posted by Noel Y. C. at 2:23 PM