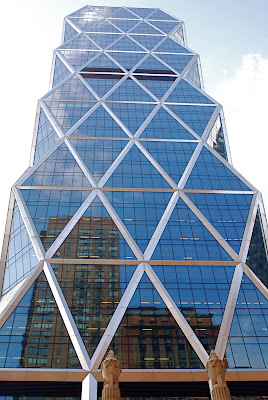 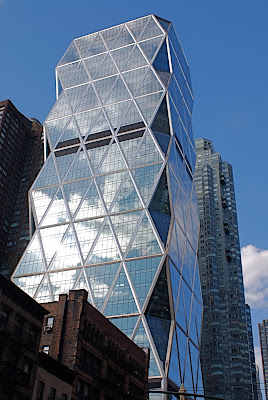 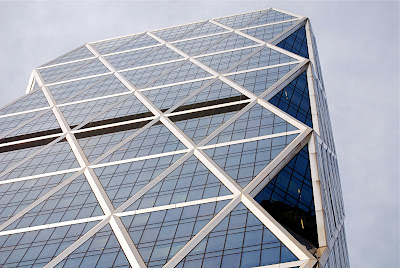 From nyc-architecture.com
The HEARST TOWER in New York City, New York is located at 300 West 57th Street on Eighth Avenue, near Columbus Circle. It is the world headquarters of the Hearst Corporation, bringing together for the first time their numerous publications and communications companies under one roof, including Cosmopolitan, Good Housekeeping and the San Francisco Chronicle, to name a few.
The former six-story headquarters building was commissioned by the founder, William Randolph Hearst and awarded to the architect Joseph Urban. The building was completed in 1928 at a cost of $2 million and contained 40,000 sq. ft. The original cast stone facade has been preserved in the new design as a designated Landmark site. Originally built as the base for a proposed skyscraper, the construction of the tower was postponed due to the Great Depression. The new tower addition was completed nearly eighty years later, and 2000 Hearst employees moved in on 4 May 2006.
The tower – designed by the architect Norman Foster and constructed by Turner construction – is 46 stories tall, standing 182 m (597 ft) with 80,000 m² (856,000 ft²) of office space. The uncommon triangular framing pattern (also known as a diagrid) required 9,500 metric tons (10,480 tons) of structural steel – reportedly about 20% less than a conventional steel frame. Hearst Tower was the first skyscraper to break ground in New York City after September 11, 2001. The building received the 2006 Emporis Skyscraper Award,[2] citing it as the best skyscraper in the world completed that year.
Hearst Tower is the first green building completed in New York City, with a number of environmental considerations built into the plan. The floor of the atrium is paved with heat conductive limestone. Polyethylene tubing is embedded under the floor and filled with circulating water for cooling in the summer and heating in the winter. Rain collected on the roof is stored in a tank in the basement for use in the cooling system, to irrigate plants and for the water sculpture in the main lobby. The building was constructed using 80% recycled steel. Overall, the building has been designed to use 25% less energy than the minimum requirements for the city of New York, and earned a gold designation from the United States Green Building Council’s LEED certification program.
The atrium features escalators which run through a 3-story water sculpture titled Icefall, a wide waterfall built with thousands of glass panels, which cools and humidifies the lobby air. The water element is complemented by a 70-foot (21.3 m) tall fresco painting entitled Riverlines by artist Richard Long.
Posted by Noel Y. C. at 6:34 PM