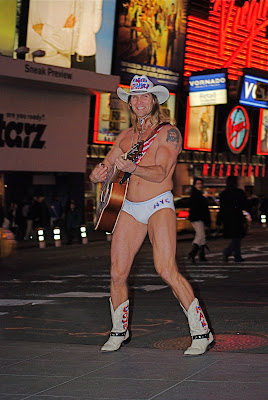 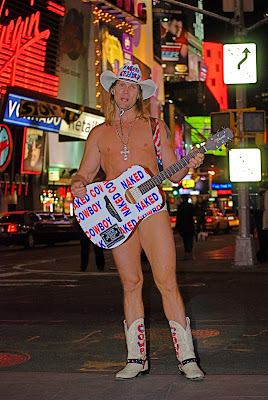 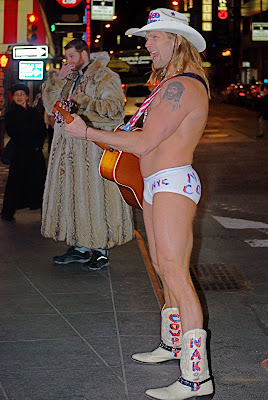 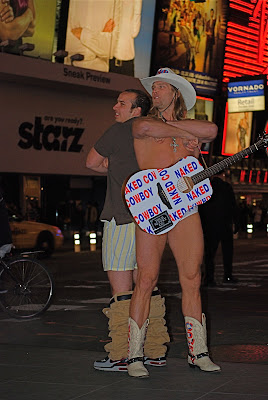 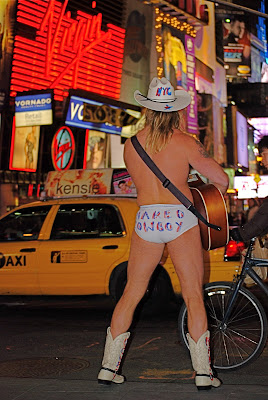 Probably the most famous and interesting busker in the city is the NAKED COWBOY. A constant fixture in Times Square, he is usually seen strutting his stuff near Duffy Square during the day, but I've never seen him after dark until tonight. While many were still walking around in their full winter garb on this cold early spring night, there he was in his signature cowboy hat, boots and white undergear with "Naked Cowboy" and "NYC" printed on it.
From wikipedia:
Robert John Burck (born December 23, 1970 in Cincinnati, Ohio), better known as the Naked Cowboy, is an American busker whose patch is on New York City's Times Square. He wears only cowboy boots, a hat, and underwear, with a guitar strategically placed to give the illusion of nudity.
Burck began busking in 1998 and first appeared on Venice Beach, Los Angeles. The public immediately gave him much of their spare change after a friend suggested to him that he dress only in his underwear in order to generate higher earnings.
Though he is currently most famous as a fixture of New York City's Times Square, Burck is also a regular in the streets of the French Quarter during the New Orleans Mardi Gras season. He also makes appearances in his hometown of Cincinnati, at the Memorial Day weekend Taste of Cincinnati festival and the Riverfest Labor Day Festival. He has also made an appearance in Austin, Texas, during the South by Southwest Music Conference, and on January 25, 2009 he performed at a Leinster Rugby game in Donnybrook, Dublin, Ireland, singing his theme song "I'm the Naked Cowboy" before 18,000 spectators.
In a 2005 online interview, Burck cited Nancy Reagan and Garth Brooks as two of his leading inspirations. During the 2008 American presidential election Burck was a staunch supporter of John McCain, remarking that the Republican candidate was "older and wiser" than his opponent Barack Obama. Additionally, on November 22, 2008, he became an ordained minister, and on December 10, 2008 he was officially registered as a marriage officiant by the City of New York.
As his popularity as the Naked Cowboy grew, Burck began to make appearances in television, music videos, and other popular media. He auditioned for American Idol during its first season, but he was not admitted to the next round. He also tried out for Australian Idol and Star Search, but with the same results. In 2000, he was also on the short-lived show Moral Court, where conservative talk show host Larry Elder ruled that, in his opinion, Burck's Naked Cowboy persona was not immoral and not a danger to public safety. Burck replied, "Actually, I think I am an inspiration to public safety." On January 24, 2009, Burck also appeared on the Tubridy Tonight show on Ireland's RTÉ television network, performing his theme song accompanied by the Camembert Quartet.
In addition, he is known to have discussed possible television show concepts with several production houses, including one in the Greater Cincinnati area, though nothing is known to have come of these talks as of yet.
Burck has also been featured in numerous advertising campaigns. As of 2006, he is part of USA Network's "Characters Welcome" campaign, and he also had a cameo appearance in a Chevrolet commercial that aired during Super Bowl XLI, as well as a Guinness advertisement that aired only in the United Kingdom and Ireland. On August 28th, 2008, Burck entered into an endorsement/licensing agreement with Divinely Naked LLC to endorse and create Naked Cowboy Nutritional Products starting with "Naked Whey Protein Powders", which launched their website on January 1st, 2009.
Burck has also made appearances in several music videos, including Cake's "Short Skirt/Long Jacket" and Nickelback's "Rockstar". In 2007, Burck released an album of his own, signing to 4Sight Music Productions and recording the pop-rock album "Year of the Cowboy" produced by Lee Evans and Gaetano Lattanzi at JAMBOX Recording Studios in New York City. The album was featured on MTV News.
He has also been featured in a number of documentaries. He is profiled in the documentary One Man Brand, produced by Mediastorm, and is also included in the second part of the three-part Richard Dawkins documentary, The Genius of Charles Darwin, first shown on Channel 4 in the UK in August 2008. He also appeared briefly in the PBS documentary Origins to give his opinion on the possibility of extraterrestrial life.
Posted by Noel Y. C. at 7:37 PM

The Naked Cowboy looks a little angry at you for taking his picture - had you not given him a tip???

I'm a recessionista. He should tip me instead for this free ad for him. LOL.