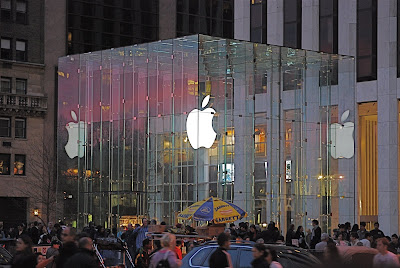 Apple in the Big Apple
Yesterday, Apple introduced its "refreshed" line of Mac desktop computers, adding stronger capabilities and slashing the prices. The new line of products include new models of its iMac, Mac mini and Mac Pro desktops, following a refresh of its MacBook notebook PCs last year. The flagship 24-inch iMac has twice the memory size and twice the storage of the previous generation 20-inch iMac, but is priced at the same $1,499. The new desktop PCs are not aesthetically different from the old iMacs, but bring much more bang for the buck.
Apple has taken the top spot in Fortune's list of most admired companies for 2008. Above is my capture of the Apple Flagship Store on Fifth Avenue, across from the Plaza, taken in December.
Posted by Noel Y. C. at 3:04 PM