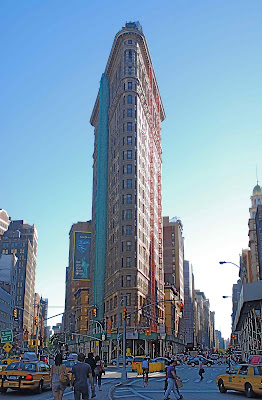 A week ago, I took this photo of the FULLER BUILDING. This building is more popularly known as the FLATIRON BUILDING because its triangular shape, only six feet wide at its rounded narrow end, resembles a flat iron. The building is located at 175 Fifth Avenue, on a triangular island block at 23rd Street, Fifth Avenue, and Broadway, facing Madison Square. It was designed by Chicago's DANIEL BURNHAM in the Beaux-Arts style. Like a classical Greek column, its limestone and glazed terra-cotta façade is separated into three parts horizontally. Since it was one of the first buildings to use a steel skeleton, the building could be constructed to 285 feet (87 m), which would have been very difficult with other construction methods of that time. It was one of the tallest buildings in New York City upon its completion in 1902, a time when there were so few tall buildings that you could be seen from from Central Park. It was also one of the first buildings to become a romantic symbol of New York.
Posted by Noel Y. C. at 8:42 PM