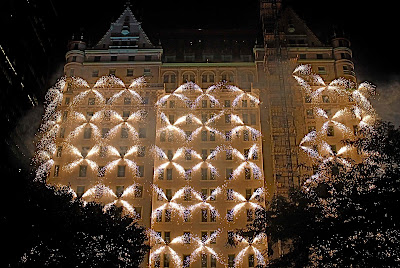 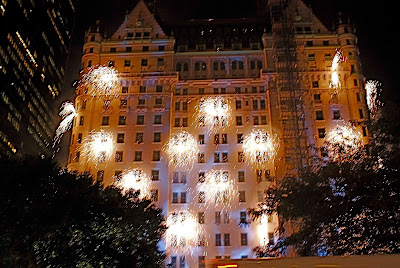 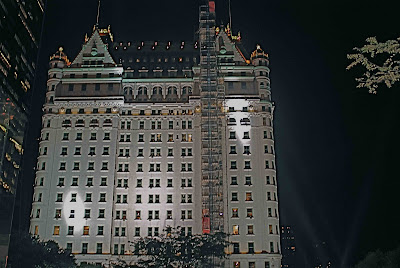 Earlier this evening, I joined the big crowd on Fifth Avenue to watch the short but spectacular fireworks and light show at THE PLAZA. The legendary New York landmark celebrates its 100th anniversary today. The outdoor celebration was hosted by actor MATTHEW BRODERICK and included PAUL ANKA's performance of "My Way." A 12-foot cake replica of THE PLAZA was on display outside. Above are some of my capture of the fireworks from the windows of the Fifth Avenue side of the legendary hotel during the festivities, but my poor technique did not do justice to the mesmerizing pyrotechnics.

The PLAZA reamains closed for renovations and will reopen as part condo/part hotel early next year. It's been written that the Plaza has now opened online reservations, with rooms starting at $755 a night from January 1, 2008. Yitzhak Tshuva's Elad Properties bought The Plaza for $675 million three years ago to convert it partially into multimillion-dollar condos. A compromise brokered by City Hall saved hundreds of hotel jobs, and the city Landmarks Preservation Commission designated several of The Plaza's interior spaces as landmarks that could not be destroyed.

Many of the world's rich and famous stayed at The Plaza through the decades, and dozens of movies have been filmed there, including "North by Northwest," "Funny Girl" and "Barefoot in the Park." "It's synonymous with celebrity," said Ward Morehouse III, author of "Inside The Plaza." "Duke Ellington liked to stay there. Stevie Wonder. Marlene Dietrich lived there," Morehouse added. "Frank Lloyd Wright lived there during the construction of the Guggenheim." The Beatles took a whole wing at The Plaza in 1964, and Capote hosted his Black and White Ball, hyped as the party of the century, there in 1966. Author Kay Thompson enchanted readers with her tales about Eloise, a little girl who lived at The Plaza with her nanny.

Designed by Henry Hardenbergh, The Plaza is styled on a French Renaissance structure that evokes a chateau and sits on the southeastern corner of Central Park.
Posted by Noel Y. C. at 8:00 PM