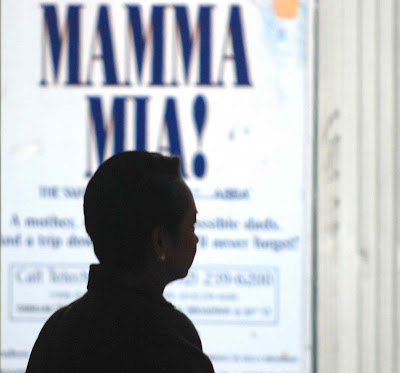 Philippine President GLORIA MACAPAGAL-ARROYO, in New York for three days to attend the 62nd United Nations General Assembly, squeezed into her tight schedule a visit to Broadway. She attended today's matinee performance of the Broadway revival of LES MISERABLES at the Broadhurst Theatre, 235 West 44th Street. It's been written that President Arroyo's favorite "international performer" is Filipino singer/actress LEA SALONGA who stars as FANTINE in Les Miz until October 21. Other cast members who are of Filipino descent are ALI EWOLDT (Cosette) and ADAM JACOBS (Marius). Mrs. Arroyo posed for photos with Salonga, Ewoldt and Jacobs on stage after the show when the audience has left. Due to tight security, the only image I managed to make is an unpresidential silhouette with a Mamma Mia poster as background outside the Broadhurst Theatre after the performance. Mrs. Arroyo also attended the Clinton Global Initiative, which was organized in 2005 by her former classmate in Georgetown University, former US president Bill Clinton. While the president's visit to the theatre district was a pleasant respite, Mrs. Arroyo was hounded later by some Filipino activists outside the Waldorf over the broadband scandal, political killings and a nurse recruitment agency. Mamma Mia!