The CATHEDRAL CHURCH OF ST. JOHN THE DIVINE 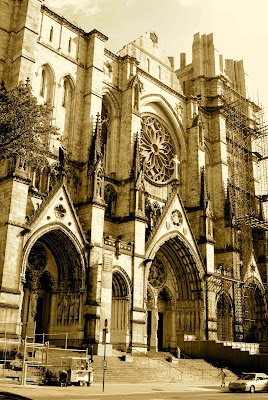 This is the CATHEDRAL CHURCH OF ST. JOHN THE DIVINE, located on Amsterdam Avenue at 112th Street in Manhattan's Morningside Heights. I made this image in early September, 2007. Representing medieval architecture against the backdrop of a very modern city, the cathedral is currently undergoing construction. When completed, it will be one of the largest religious edifices in the world. The church is the mother church of the Episcopal Diocese of New York and the Seat of its Bishop.

The building as it appears today conforms primarily to a second design campaign from the prolific Gothic Revival architect Ralph Adams Cram of the Boston firm Cram, Goodhue, and Ferguson. Without slavishly copying any one historical model, and without compromising its authentic stone-on-stone construction by using modern steel girders, Saint John the Divine is a refined exercise in the 13th century High Gothic style of northern France. The Cathedral is almost exactly two football fields in length (601 feet or 186 meters) and the nave ceiling reaches 124 feet (37.7 meters) high. It is the longest Gothic nave in the world, at 230 feet. Seven chapels radiating from the ambulatory behind the choir are each in a distinctive nationalistic style, some of them borrowing from outside the gothic vocabulary. Known as the "Chapels of the Tongues" (Ansgar, Boniface, Columba, Savior, Martin, Ambrose and James), their designs are meant to represent each of the seven most prominent ethnic groups to first immigrate to New York City upon the opening of Ellis Island in 1892 (the same year the Cathedral began construction). In the center, just beyond the crossing, is the large, raised High Altar, behind which is a wrought iron enclosure containing the Gothic style tomb of the man who originally conceived and founded the cathedral, The Right Reverend Horatio Potter, D.D., LL.D., D.C.L., Bishop of New York. Later Episcopalian bishops of New York, and other notables of the church, are entombed in side chapels. Directly below this is a large hall in the basement, used regularly to feed the poor and homeless, and for meetings, and multiple crypts. On the grounds of the Cathedral, toward the south, are several buildings (including a Synod Hall and the Cathedral school), as well as a large bronze work of public art by the Cathedral's sculptor-in-residence, Greg Wyatt, known as the Peace Fountain, which has been both strongly praised and strongly criticized.
Posted by Noel Y. C. at 8:39 PM