SUMMER OF LOVE: ART OF THE PSYCHEDELIC ERA at the WHITNEY MUSEUM 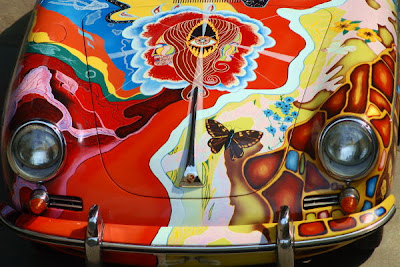 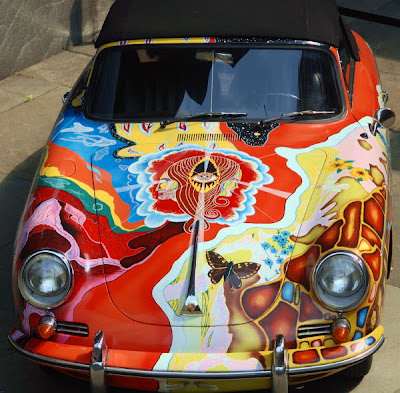 Last Sunday, we visited the new exhibit of psychedelic art at the Whitney Museum of American Art on Madison Avenue. It’s called Summer of Love: Art of the Psychedelic Era. A major attraction of the show is a hand-painted 1965 Porsche 356c Cabriolet super c once owned by the lead rock singer of the 60s' JANIS JOPLIN. Shown above are photographs I made of the “psychedelic” car featuring the artwork by DAVE RICHARDS. The exhibition has travelled from to and before coming to the .

Psychedelic art, characterized by its use of vibrant colors, complex design, and vivid imagery, came of age during the period of intense racial, and political revolution of the 20th century. During a time of tumultuous social and political upheaval, defined by several events including the civil rights movement, the Cold War, and the Vietnam War, artists, filmmakers, poets, architects and musicians created visionary art that illustrated a desire for alternative lifestyles. The exhibition showcases these works of art which runs through mid-September.

"Janis Joplin paid about $3500 for this 1965 Porsche 356c Cabriolet when she bought it from a auto dealer in September 1968. Prior to the sale, the dealer had painted the car oyster white. , however, wanted something more dramatic, and Dave Richards, a friend and Big Brother roadie, created this psychedelic design, which includes an image of Janis and Big Brother on the front left fender.

The car quickly became identified with Joplin, who drove it around , where she lived, and down to , where she recorded. Whenever she parked it somewhere, fans would leave notes under the wipers. Once, while was at a gig, the car was stolen. The thief spray painted it gray, but when it was retuned, found an auto shop that was able to recover the psychedelic finish.

A few months after ’s death in 1970, her family gave the car to Albert Grossman, Janis’ manager. He kept it in , where it was used by visiting artists, friends and clients. In 1973, he returned the car to the Joplins, who used it as a family car.

The car has been restored several times over the years. Most of the engine and body parts are original. The seats have been re-covered, and the cloth on the convertible top is new. The body was repainted as close as possible to the original design by the Denver Center Theatre Company paint shop in 1994."

Wow, that is so neat! I had no idea... thanks for sharing!