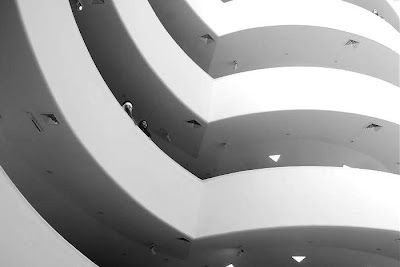 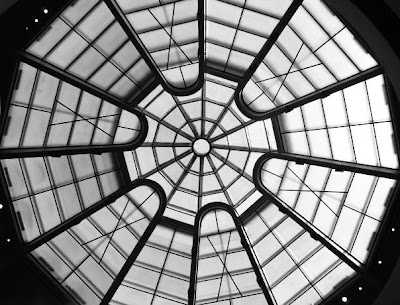 My visit to the SOLOMON GUGGENHEIM MUSEUM on Fifth Avenue (at 89th Street) in Manhattan is always about experiencing not only the art on display, but also the structure of the museum itself. I made images of some aspects of the interior, including the spiraling floor plan, as well as the skylight as shown above. The museum was one of the last structures that FRANK LLOYD WRIGHT designed before his demise in 1959. It highlights the progression of his architectural designs from linear to circular, counteracting the right angles that typically dominate architecture. The floor plan is one single fluid ramp spiraling up six stories. A skylight illuminates the interior from above, and the white concrete walls reflect the light. Currently, the exterior of the building is undergoing restoration.

"Wright made no secret of his disenchantment with Guggenheim's choice of New York for his museum: "I can think of several more desirable places in the world to build his great museum," Wright wrote in 1949 to Arthur Holden, "but we will have to try New York." To Wright, the city was overbuilt, overpopulated, and lacked architectural merit."