THE SHAPES OF SPACE at the GUGGENHEIM MUSEUM 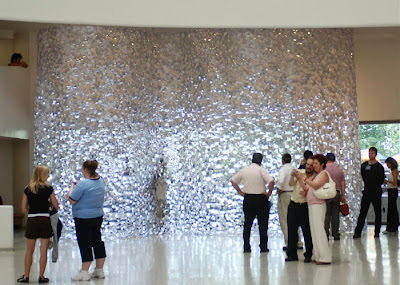 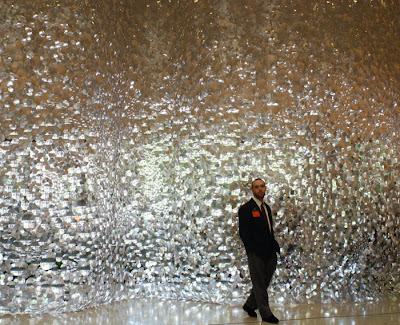 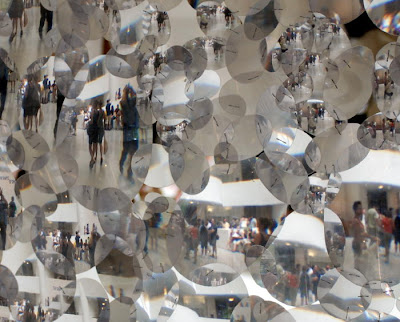 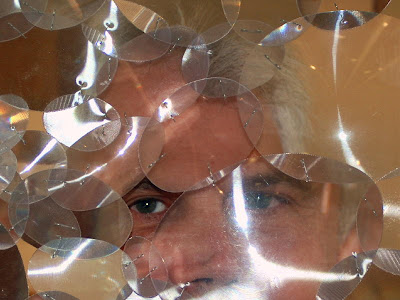 Displayed at the ground floor of the is the mesmerizing panel made of cut plastic Fresnel lens sheets and staples, designed by ALYSON SHOTZ. A Fresnel lens is a type of lens invented by French physicist Augustin-Jean Fresnel, originally developed to focus the beam in lighthouse lamps. Fresnel lenses are used in the lens of traffic signals and to shape the light beam in overhead projectors as well as in molded plastic versions which are sometimes placed on the rear windows of motorhomes to broaden the drivers rearward field of view.

From http://science.howstuffworks.com: “The basic idea behind a Fresnel lens is simple. Imagine taking a plastic magnifying glass lens and slicing it into a hundred concentric rings (like the rings of a tree). Each ring is slightly thinner than the next and focuses the light toward the center. Now take each ring, modify it so that it's flat on one side, and make it the same thickness as the others. To retain the rings' ability to focus the light toward the center, the angle of each ring's angled face will be different. Now if you stack all the rings back together, you have a Fresnel lens.”

SHOTZ’ work is made of thin commercial type of Fresnel lens sheet of bendable plastic cut into circular or oval pieces and stapled together cascading from the roof to the floor. This installation is part of a special exhibit called THE SHAPES OF SPACE which “makes visitors aware not only of the ways in which space is manifested within art but also the different ways in which art can engage its surroundings and reorient the viewer's own position within space.”