110 IN THE SHADE the BROADWAY MUSICAL REVIVAL 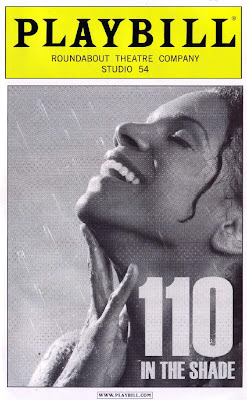 Taking advantage of the 4th of July holiday, we went to TKTS and got half-price tickets (without the usual long line of tourists) for the Broadway revival of "110 in the Shade." Four-time Tony Award winner AUDRA McDONALD stars as Lizzie Curry, who is on the verge of becoming an old maid, when a charismatic rainmaker comes along. Set in the Texas Panhandle on July 4, 1936, the show was wonderful and Audra McDonald was marvelous as always. "110 in the Shade" at STUDIO 54 is a production of the Roundabout Theatre Company.

From the New York Times (by Ben Brantley)

Is it possible for a performance to be too good? Audra McDonald brings such breadth of skill and depth of feeling to the Roundabout Theater Company revival of “110 in the Shade” that she threatens to burst the seams of this small, homey musical. Ravishing of voice and Olympian of stature, she’s an overwhelming presence in an underwhelming show. Steve Kazee is a wanderer and Audra McDonald a small-town girl in “110 in the Shade,” a musical based on N. Richard Nash’s “Rainmaker.” Watching Ms. McDonald in this gentle, threadbare tale of a love-starved spinster in a rain-starved farmland, which opened last night at Studio 54, is like drinking rare Champagne from a plastic cup. Yes, a Baccarat flute would be preferable. On the other hand who’s going to turn down the chance to sample a vintage Cristal? For what Ms. McDonald makes of Lizzie Curry, an unmarried woman in a household of manly men, is a dazzling case for the musical as a dramatic form that plumbs hearts and minds. She so blurs the lines between spoken and musical expression that one seems like a natural extension of the other. Singing for Ms. McDonald is just a more emphatic and articulate way of talking, one that’s needed when emotions are so intense they can’t be captured without the texture and shading of melody. When you listen to Ms. McDonald’s Lizzie sing about the ache of loneliness or her disgust for the words “old maid,” you don’t know how she feels; you feel how she feels. You’re likely to find tears in your eyes by the end of even comic songs.

Nothing else in Lonny Price’s production, which officially concludes the Broadway season, warrants tears, either of joy or distress. First produced on Broadway in 1963, with songs by Harvey Schmidt and Tom Jones (“The Fantasticks”) and a book by N. Richard Nash (adapted from his play “The Rainmaker”), “110 in the Shade” is a poor man’s “Music Man.” Like Meredith Willson’s high-stepping blockbuster of 1957, “110” is an all-American love story about a con man who brings sweet relief to the parched life of a small-town virgin. Both trade in a Norman Rockwell vision of the United States. But if “The Music Man” is a John Philip Sousa-style blast of brass, “110” is an Aaron Copland-esque twang of fiddle strings. The songs in “110” are tuneful, pseudo-rustic and on occasion as cute as buttons on overalls. This is not music that rattles the rafters. On the contrary, it seems to melt away even as it’s being performed, despite the caressing orchestrations of Jonathan Tunick and masterly music direction by Paul Gemignani. Extolling the pleasures of “simple little things,” to borrow from one of Lizzie’s songs, “110” left critics unawed 44 years ago, though it ran for 330 performances. “There is no danger even a lightning bolt could ignite it,” Howard Taubman wrote in The New York Times. Well, if Ms. McDonald doesn’t qualify as a lightning bolt, I don’t know who does. But it’s true that while she does provide a blazing center, the temperature of the show around her remains steadily lukewarm. Mr. Price’s direction emphasizes the cuddly aspects of the show in ways that date it more than necessary. Though Santo Loquasto’s revolving wooden set, overhung by a giant moonlike sphere, has a fairy tale starkness, much of the production feels like a family-oriented romance from the early 1960s, before rock ’n’ roll was king. There are songs about cleaning up the house and playing poker and going on a picnic and about, gosh, how very hot it is.

Within this small and cozy world, Lizzie oversees a household that includes her father, H. C. (the excellent John Cullum), and her brothers, Noah (the stern one, played by Chris Butler) and Jim (the cute one, played by Bobby Steggert). She pines quietly for a man of her own, preferably File (Christopher Innvar), the moody town sheriff. Her prayers seem destined to go unanswered until a charismatic wanderer named Starbuck (Steve Kazee) shows up, promising to bring rain to the dying fields. Lizzie learns that she is a woman and hence worthy of being loved. And just to make sure she knows it, her father slips Starbuck a hundred bucks in the hopes that he’ll spend the night with her. As you can tell, “110” remains family entertainment only for families without feminists. But its patronizing view of its heroine doesn’t keep Ms. McDonald from building a fully authentic character. She finds revitalizing detail in even shopworn gestures, like fiddling with her buttons to indicate nervousness. And she uncovers a barbed self-awareness in a wistful ballad like “Love, Don’t Turn Away” and the pain in a comic number like “Raunchy.” Yet even the most ambitious of the songs — including the searing nervous breakdown of an aria, “Old Maid” — can’t quite take this complex Lizzie to the levels you know she could ascend to.

Aside from Mr. Cullum, who has a marvelously easy rapport with Ms. McDonald onstage, none of the men in Lizzie’s life seem worthy of her. Part of this may come from miscasting. As Starbuck, the pleasant-voice, round-faced Mr. Kazee, clad in snug black denim, suggests a Boy Scout posing as a biker dude. As the straight-and-narrow File, on the other hand, Mr. Innvar positively smolders. (Role switch, anyone?) When at last the skies open in “The Rainmaker,” in a stage-drenching climax, Ms. McDonald seems utterly happy and at home. Elemental force meets elemental force. Now that’s a love match.