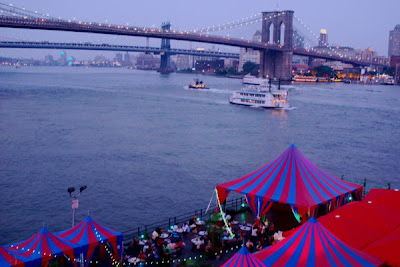 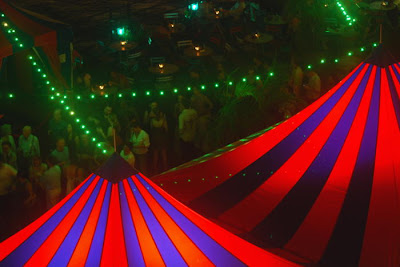 Above are photos of a portion of the venue for LA VIE, a cabaret style theatreo-batic show presented by 's sizzling circus-arts theatre company, Les 7 Doigts de la Main. We attended the Saturday night show at SPIEGELTENT located at Pier 17, South Street Seaport, near the foot of the . The SPIEGELTENT, in only for three months this summer, has a circular stage, an opulent decor of mirrors and brocade, and a mere six rows of seats plus banquettes along the perimeter. Four years ago, seven extraordinary performers from CIRQUE DU SOLEIL and beyond formed the company which has since captivated audiences around the globe. Their mix of life-threatening aerial acrobatics, wild characters and wicked music has been part of the SPIEGELWORLD stage (http://spiegelworld.com/). Although I cringed at some of the weird humor in the show, the juggling and aerial acrobatic acts were truly amazing.

“La Vie,” less action-packed than “Absinthe” but with a clearer conceit, begins with a man (Patrick Léonard) plummeting seemingly from nowhere onto a bed. We soon discover that not only is he dead, the rest of us are too. The host of this trip through the afterlife is an obnoxious — and French — bull of a man (Sebastien Soldevila) who informs the audience that they are in Purgatory. A fierce master of ceremonies, he introduces a wild-faced and astoundingly flexible contortionist (Isabelle Chassé) wrapped in a straitjacket, and a flight attendant (Shana Carroll) on a trapeze.

The show, with images of asylums and Kafkaesque bureaucracy, occasionally veers into Blue Man Group territory. (It might be time to retire blowing on giant tubes, which is fast losing its novelty.) Mr. Soldevila and Mr. Léonard show amazing teamwork with a juggling act involving a spinning top and a wire that ends with several highly unlikely feats of hand-eye coordination. Mr. Soldevila pauses for applause. “I know, I know,” he says. “I am very good.”

He’s right, of course. But what really makes these Spiegelworld productions such unusual, exciting and slightly uneasy experiences is their intimacy. When an acrobat hangs precariously by a chain right above your head, it’s difficult to be a passive observer. And the performers in both shows make an effort, like it or not, to include the crowd.

Wow, sounds neat, I would love to check it out. Thx for sharing. :)