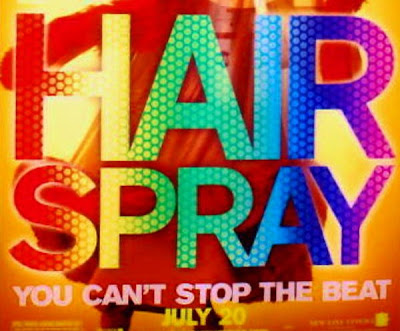 Photo above is part of a bus stop ad for HAIRSPRAY, a funny and delightful movie that I saw over the weekend at the AMC Theatres at 68th Street and Broadway. This movie is an adaptation of the still-running 2002 Tony Award-winning Broadway musical of the same title, itself adapted from John Waters' 1988 comedy film with Ricki Lake. Set in 1962 Baltimore, the film tells the story of Tracy Turnblad as she simultaneously pursues stardom as a dancer on a local TV program, "The Corny Collins Show," and rallies for racial integration.

That “Hairspray” is good-hearted is no surprise. Adam Shankman’s film, lovingly adapted from the Broadway musical, preserves the inclusive, celebratory spirit of John Waters’s 1988 movie, in which bigger-boned, darker-skinned and otherwise different folk take exuberant revenge on the bigots and the squares who conspire to keep them down. The surprise may be that this “Hairspray,” stuffed with shiny showstoppers, Kennedy-era beehives and a heavily padded John Travolta in drag, is actually good.

Appropriately enough for a movie with such a democratic sensibility, there is plenty of credit to go around. Mr. Shankman, drawing on long experience as a choreographer, avoids the kind of vulgar overstatement that so often turns the joy of live musical theater into torment at the multiplex. The songs, by Marc Shaiman and Scott Wittman, are usually adequate, occasionally inspired and only rarely inane. And they are sung with impeccable diction and unimpeachable conviction by a lively young cast that includes Nikki Blonsky, Amanda Bynes, Zac Efron and the phenomenally talented Elijah Kelley.

Of course there are better-known, more-seasoned performers on hand as well, notably Queen Latifah, Michelle Pfeiffer, Christopher Walken and Mr. Travolta. But “Hairspray” is fundamentally a story about being young — about the triumph of youth culture, about the optimistic, possibly dated belief that the future will improve on the present — and its heart is very much with its teenage heroes and the fresh-faced actors who play them.

Ms. Blonsky, a ball of happy, mischievous energy, is Tracy Turnblad, a hefty high school student whose dream is to dance with the city’s most telegenic teeny-boppers on “The Corny Collins Show.” Ms. Bynes plays Penny Pingleton, Tracy’s timid best friend, whose prim mother (Allison Janney) won’t even let Penny watch the show, much less appear on it. Mrs. Pingleton can scarcely imagine that her daughter will eventually fall for Seaweed (Mr. Kelley), part of a group of black kids whom befriends in the detention hall after school.

As Penny and Seaweed test the taboo against interracial romance, Tracy and Link Larkin (Mr. Efron), a “Corny Collins” dreamboat, take on the tyranny of slenderness. That “Hairspray” cheerfully conflates racial prejudice with fat-phobia is the measure of its guileless, deliberately simplified politics. Upholding both forms of discrimination is Velma Von Tussle (Ms. Pfeiffer), a television station executive who uses “The Corny Collins Show” — against the wishes of Corny (James Marsden) himself — as a way of maintaining the color line and promoting the celebrity of her blond, smiley daughter, Amber (Brittany Snow).

“Hairspray” does not seriously propose that Tracy and her new African-American friends face equivalent forms of injustice. But it does make the solidarity between them feel like an utterly natural, intuitive response to the meanness and arrogance of their common enemies. “Welcome to the ’60s,” sings to her mother, conjuring up the New Frontier hopefulness of that decade’s early years rather than the violence and paranoia of its denouement.

In freezing history at a moment of high possibility — a moment whose glorious popular culture encompasses “West Side Story” and the Twist, early Motown and Phil Spector’s Wall of Sound — “Hairspray” is at once knowingly corny and unabashedly utopian. On “The Corny Collins Show” Seaweed and his friends are relegated to a once-a-month Negro Day, presided over by Motormouth Maybelle (Queen Latifah). envisions a future when, as she puts it, “every day is Negro Day.”

What is missing from “Hairspray” is anything beyond the faintest whisper of camp. The original “Hairspray” may have been Mr. Waters’s most wholesome, least naughty film, but there was no containing the volcanic audacity of Divine, who created the role of Edna Turnblad. Divine, who was born Harris Glen Milstead and who died shortly after the first “Hairspray” was released, belonged to an era when drag performance still carried more than a touch of the louche and the dangerous, and was one of the artists who helped push it into the cultural mainstream.

Perhaps wisely Mr. Travolta does not try to duplicate the outsize, deliberately grotesque theatricality of Divine’s performance or to mimic the Mermanesque extravagance of Harvey Fierstein’s Broadway turn, choosing instead to tackle the role of Edna as an acting challenge. The odd result is that she becomes the most realistic, least stereotypical character in the film, and the only one who speaks in a recognizable (if not always convincing) accent. (“Ahm tryna orn,” she complains when she’s trying to iron.)

A shy, unsophisticated, working-class woman, Edna is ashamed of her physical size even as she seems to hide inside it, as if seeking protection from the noise and indignity of the world outside. It is Tracy who pulls her out of her shell, and without entirely letting go of Edna’s timidity, Mr. Travolta explores the exhibitionistic and sensual sides of her personality.

Mr. Walken’s gallantry in the role of Edna’s devoted husband, Wilbur, is unforced and disarmingly sincere, and their duet, “(You’re) Timeless to Me,” is one of the film’s musical high points. Another is “Without Love,” in which the two young couples express their yearning with the help of some ingenious and amusing special effects.

There are, to be sure, less thrilling moments, and stretches in which the pacing falters. But the overall mood of “Hairspray” is so joyful, so full of unforced enthusiasm, that only the most ferocious cynic could resist it. It imagines a world where no one is an outsider and no one is a square, and invites everyone in. How can you refuse?