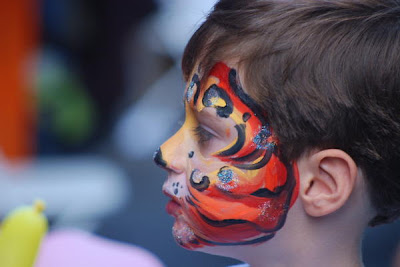 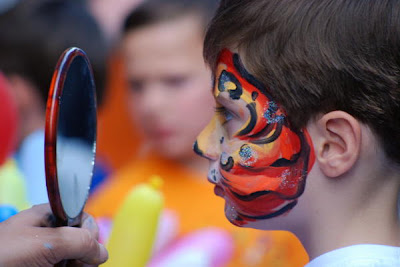 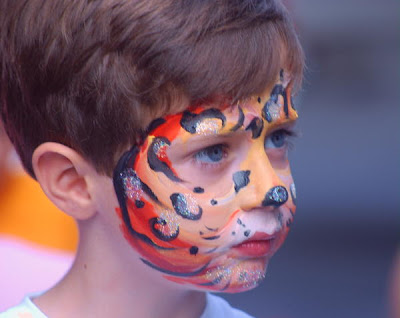 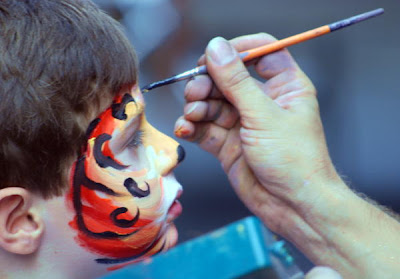 Face painting was very popular among kids at today's BASTILLE DAY STREET FAIR, which was three blocks (60th Street between Lexington and Madison Avenues) of the sights, sounds, and flavors of French culture, where New Yorkers are invited to be French for a day.

Bastille Day, the French national holiday, commemorates the storming of the Bastille, which took place on July 14, 1789 and marked the beginning of the French Revolution. The Bastille was a prison and a symbol of the absolute and arbitrary power of Louis the 16th's Ancient Regime. By capturing this symbol, the people signaled that the king's power was no longer absolute: power should be based on the Nation and be limited by a separation of powers.

The street fair featured sampling the cuisine of France and French-speaking countries from vendors including: Bouchon Bakery, The French Culinary Institute, Le Bec Fin, Opia, Payard, Petrossian, Seppi’s, and Trois Crêpes Patisserie, among others. We sampled delicious pastry from Payard. A festive “open-air picnic” area with tables covered in checkerboard tablecloths was set up along the three blocks. There was also live music by three bands direct from : The Penelopes, Poni Hoax, and Frustration, appearing courtesy of Agnès b.’s “J’aime la Musique” program. Other live acts including French Cancan dancers, the “nouvelle bossa” singer Pascalito, DJ Indaloh, and traditional dancers also appeared on the festival stage throughout the afternoon.

For kids, the hosted an Arts & Crafts activity booth. Two specialty bars gave adults the chance for a more spirited celebration! The Bastille Day Bar in the FIAF lobby served Moutin Cadet white, red, and rosé wines, and Kronenboug 1664, the premium lager of Brasseries Kronenbourg. Across the street, a Martinican Case à Rhum, a tropical hut offering drinks made with rums from , located at Bistro 60.