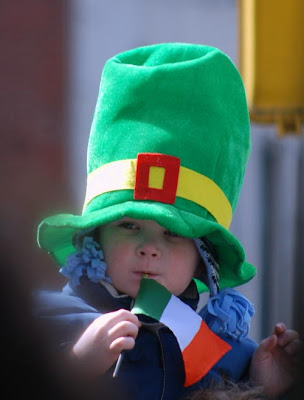 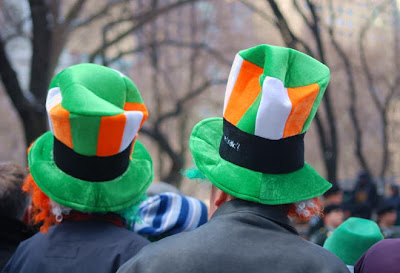 Today, it's fun being green. It's the St. Patrick's Day parade on Fifth Avenue. I took photos of some of the spectators who were just as interesting as the marchers. The Patrick's Day parade in was held in 1766 when city folks marched the streets usually organized along fraternal, trade or military organizational lines. The early St Patrick's Day marchers would form up at their parish churches or their organizations' headquarters and march to the Old St Patrick's Cathedral (now at Mott and Prince Streets). The Archbishop greeted the groups, dignitaries and politicians addressed the crowd and the marchers dispersed in search of a bit of St Patty's Day celebration. Today's parade started at 11:00 AM at and marchers traveled north to . It is customary for the New York Archbishop to review the parade in front of St. Patrick's Cathedral. The St. Patrick's Day Parade is one of the few remaining where no cars, floats, buses, trucks or other vehicles are allowed. People march up , led by members of the 165th Infantry (originally the Irish 69th Regiment of Fighting Irish fame). Sponsored by the Ancient Order of Hibernians, the more than 150,000 marchers are members of various Irish societies from and around the country; many Eire-based societies make the Atlantic crossing to trek the two miles uptown. Large contingents include the Emerald Societies of the New York City Police and Fire Departments, line dance groups, bands, and any politician running for office. Happy St. Patrick's Day!