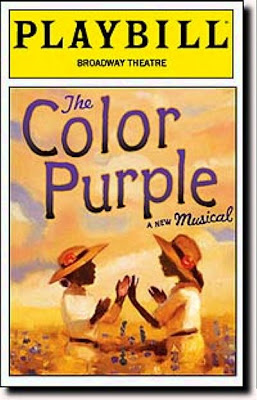 Last Saturday night, two former classmates in college and I saw the Broadway musical THE COLOR PURPLE. I have neither read Alice Walker’s novel nor seen the movie version so I didn’t know what to expect that evening. The gospel-inspired musical revolves around Celie, a black woman who suffers indignities ranging from incest to physical and emotional spousal abuse. She is also kept in the dark as to whether her own children and her beloved sister are alive or not. In the end, she prevailed, found strength to overcome adversity and discovered love, independence, creativity and spiritual renewal. The story is very moving and the performances were flawless. Celie was wonderfully played by KENITA MILLER who understudied the role since the beginning of the Broadway run in December 2005. Although sometimes I got tired of looking at her stiff “in despair” facial expression, MILLER effectively used her rich and powerful voice to interpret the songs beautifully, especially the song “I’m here.” In between over the top dramatic scenes were dance numbers blended with with blues, gospel, jazz, swing, rural roots and African music. Plus, the crowd-pleasing scene stealers. The most prominent scene stealer was NATASHA YVETTE WILIAMS’ . She accompanied her advice to Celie to stand up to her abusive spouse with the entertaining song called "Hell No!" to the delight and wild applause of the audience. Also remarkable were the three gossipy church ladies who acted throughout as an entertaining chorus to give an amusing commentary on what was happening. The audience didn’t seem to mind too many characters and plots in the show. I am always amazed by the artistry of set and lighting designers in stage plays and musicals. And this show is no exception. John Lee Beatty's set and Brian MacDevitt's gorgeous lighting were just poetic and evocative. Overall, the story was moving and the performances were unforgettable.

The show was nominated for 11 Tony Awards last year, winning only one for LaChanze (Best Actress in a Musical), who originated the lead role of Celie. In a few weeks, Celie will be played by FANTASIA, adding to the list of AMERICAN IDOL singers to appear on Broadway. One of the show’s producers is OPRAH WINFREY who was nominated for an Oscar for her role in the movie version. THE COLOR PURPLE plays the Broadway Theatre at Broadway and .

If I ever see the movie around I'll be sure to pick it up. But now I can't get "start wearing purple" out of my head. by gogol bordello. Kind of a celtic punk song.

The movie "The Color Purple" by Steven Spielberg is one of my favorite movies of all time. It was in this movie that i started admiring Oprah Winfrey and Whoopi Goldberg as actresses. I'm sure the musical version is as exciting. I wish i would be able to see it live in Broadway in the future!!!

Karl: I'm sure the movie is very good too.

Joseph: I also wish that you and Jon would be able to see it on Broadway.This one might be on for a while because of the Oprah factor. All the actors are just powerful singers and the entertaining musical numbers here and there counterbalance the dramatic moments.