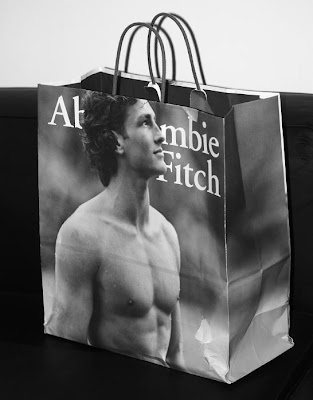 The BRUCE WEBERized ABERCROMBIE & FITCH shopping bags carried by tourists and locals can be easily spotted on ’s shopping district. Above is a photograph I made of an A&F bag on a black couch. The flagship store of A&F opened on two years ago. Inside the store, the music is loud, thumping like a nightclub, and the lighting is a little dark. But the store is always crowded with young shoppers who during warmer months are greeted by shirtless male models at the entrance. In the 1990’s A&F was transformed into the retailer of choice for American youth, a demographic said to be growing the fastest during that time. The company also began publishing A&F Quarterly, a catalogue featuring its clothing lines as well as articles on pop culture, sex, music, and other teen topics. Photographer and occasional filmmaker BRUCE WEBER’s art fills the catalogue and A&F's racy advertising with an open sexuality, with his often near naked, seemingly casual and highly eroticised images of men and women. Weber’s photography, usually in black and white appealed to target customers but his catalogue photographs became highly controversial. Nevertheless, Weber, the fashion photographer who doesn't seem to be interested in photographing clothes, imbued this photographic genre to mainstream advertising. Today, his artwork and photography books have become collectible items.

Founded in New York City in 1892 by David T. Abercrombie, the original store was dedicated to selling the highest-quality camping, fishing and hunting gear. In 1900, Ezra Fitch, a devoted customer, convinced Abercrombie to let him buy part of the company. In 1904, the store name was officially changed to Abercrombie & Fitch. Due to differences between the two men over the direction of the business, Abercrombie resigned in 1907. Ezra Fitch led the company into the largest sporting goods store in the world. A&F has outfitted famous clients including former Presidents. Today, A&F is a popular retailer of casual clothing and accessories for young men and women with stores nationwide and markets directly to customers online or through a catalogue.

Hi Iam Prabhu from chennai,joined today in this forum... :)