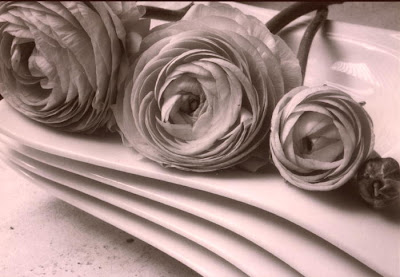 Today is the first day of spring, although it's probably the coldest day of the week in New York. This is when the sun sits directly above the equator on its apparent trip northward. As the Earth revolves around the sun, the Northern Hemisphere, becomes tilted more toward the sun as winter turns to spring. The Southern Hemisphere, on the other hand becomes tilted more away from the sun.

The daffodils and tulips are not in bloom yet in the city. Above is a film-based image that I made a while ago of white Ranunculus blooms on a stack of plates. The Latin name ranunculus means "little frog". These flowers originated from the , hence their alternative name "Turban Buttercup". They have tuberous roots and hollow stems.

Mythology of Ranunculus (from http://www.flowers.org.uk): In fairy tales frogs are apt to change into princes and it was an Asian prince in just such a story who gave his name to this flower, which grows naturally in swampy ground. The prince was so good-looking that he was loved by everyone. He also had a beautiful voice but this was his undoing. He loved the open country and sang delightful songs in the presence of nymphs. He did not have the courage to declare his love to them and this haunted him so much that he died. After his death he was changed into the flower with delicate tissuey petals which bears his name.

And same to you Irene.

Great composistion! I think I ended up having a fairly warm spring. For the north anyways.