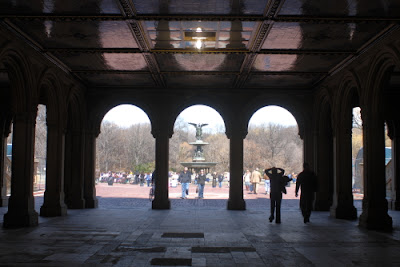 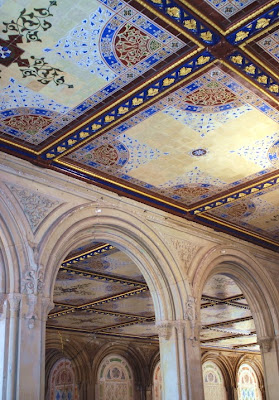 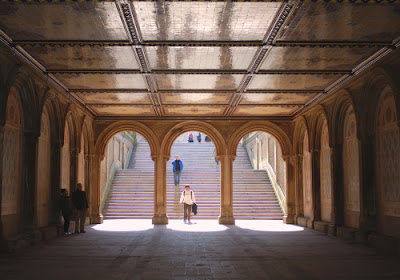 Yesterday, the Parks & Recreation Department and the Central Park Conservancy officially reopened the newly restored 's BETHESDA TERRACE ARCADE. One of the few formal architectural features of , this sits across from the Bethesda Fountain and under 72nd Street as it crosses . The tiles were removed from the 's ceiling more than 20 years ago due to severe corrosion, and were stored until the not-for-profit Central Park Conservancy stepped in to initiate the restoration. After many years of labor-intensive repair and a price tag of $7 million, the rare Minton-tile ceiling was finally reinstalled. Although most of the tiles were restored, some 10% of the tiles were corroded beyond repair so new tiles were manufactured by hand by the Maw and Company in . The ceiling of the has 49 panels, each with 324 tiles. The arcade was designed in the mid 1860s by Calvert Vaux and his assistant Jacob Wrey Mould with tiles made by the Minton Company of . Today being a mild day, I joined the other park visitors and joggers in taking the underground passageway of the marvelous Arcade.