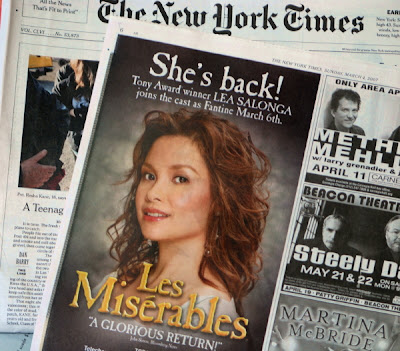 Although the ad in today's Arts & Leisure section of the New York Times says LEA SALONGA joins the cast of LES MISÉRABLES on March 6th, the Tony Award winning actress actually began performance last Friday, March 2nd. She plays the role of Fantine in this Broadway revival of the popular musical at the Broadhurst Theatre. The revival runs through at least the summer of 2007, and Salonga is expected to stay with the production through the entire period. Salonga played Eponine in 1993 in the original Broadway run.

Philippine native Lea Salonga became an international stage star when she was chosen to play the lead role in the 1989 world premiere of Boublil and Schonberg's Miss Saigon. At 17, she received critical acclaim and went on to win the Olivier Award as Best Actress in a Musical in London. In 1991 she reprised her performance on Broadway for which she won the Tony Award as Best Actress in a Musical, along with Best Actress honors from the Drama Desk and the Outer Critics' Circle. In 2002, Salonga returned to Broadway via Rodgers & Hammerstein's Flower Drum Song. She also recently made her triumphant solo debut at a sold-out concert at Carnegie Hall.

Salonga's voice has been described as "hopeful as daybreak," and her interpretation of music "pure." I personally admire Les Miz' new Fantine not only for her clarion voice and enormous talent, but also for her love of country and pride of her ethnicity. In a recent interview, the new mother considers it a great achievement "that through whatever I've done, the image of the Filipino was made a little more positive, and that somehow, the Filipino was given the chance to smile and be proud. Hopefully, the world's awareness of the Filipino artist remains." A few weeks ago, Philippine President Gloria Arroyo conferred on Salonga the prestigious Order Of Lakandula, the highest honor given to a civilian, for her outstanding contribution to musical theater and world entertainment.

As usual, she is terrific.