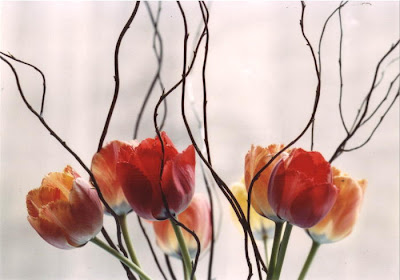 In anticipation of spring which is officially three weeks away, I took photos of tulips on a vase placed on my window sill, with the sun-drenched wall of the neighboring apartment building as background. Tulips for me are a cheerful reminder that winter days are numbered. These blooms are widely available in , from corner Korean delis to fancy flower shops.

The tulip is actually a native of Central Asia, in the Tien-Shan and the Pamir-Alai mountain ranges near Islamabad, Pakistan. A secondary genetic center developed in Azerbaijan and Armenia. The tulip is still closely associated with the even though it is not a native Dutch flower. The Dutch, however made tulip cultivation the cornerstone of an industry that lasted hundreds of years. Tulips were not introduced to the until 1593. These flowers were first seen by Europeans in and it is believed that the Turks had been cultivating tulips as early as AD 1000. The tulip got its name from the Turkish word for turban, owing to the flower's resemblance to the Middle Eastern headgear. Tulips are perennial bulbous plants with waxy-textured green leaves and large flowers with six velvety petals. In three weeks, the botanical gardens and parks throughout Manhattan will flourish into full bloom with displays of brilliant flower blossoms including tulips.

This is by your apartment window?!...my goodness, you are so lucky:-) We are still reeling from the aftermath of the winter storm yesterday:-(

Karl: Thanks.
Irene: Actually, the tulips are on a vase placed on my window sill for natural lighting. But anyhow, we really have nothing to complain about winter this year. Aside from the fact that I was in the beautiful Philippines for 21 days, the recent winter storm didn't affect us at all.