The Other CHARGING BULL 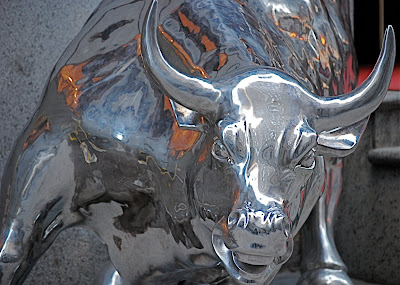 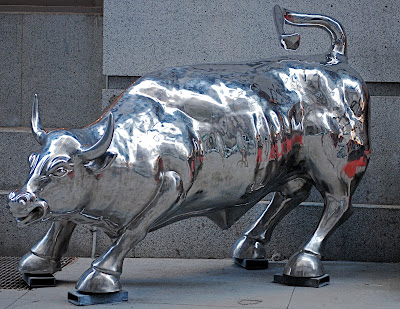 In front of 55 Wall Street is this CHARGING BULL sculpture by ARTURO DI MODICA. Not as famous as the bronze sculpture in Bowling Green Park (called the Wall Street Bull or Bowling Green Bull), the silver sculpture was photographed in front of 55 Wall Street, the building erected in 1836 as the City National Bank. In 1998, the building was converted to The Regent Wall Street Hotel which closed in 2003 due to lack of business after the September 11 attacks. The building has now been converted to condominiums by the Cipriani Group.
The Charging Bull is an unofficial symbol of the Financial District, representing optimism. Di Modica created the sculpture after the stock market crash of 1987 as a symbol of the "strength, power and hope of the American people for the future."
Posted by Noel Y. C. at 4:37 PM

I love your art but i'd like to see a dimmer side of the city, ya know? the grit.