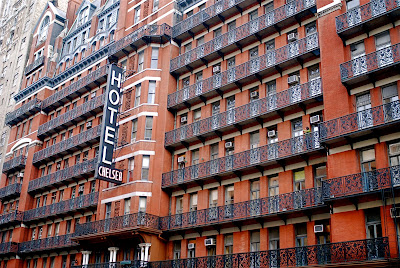 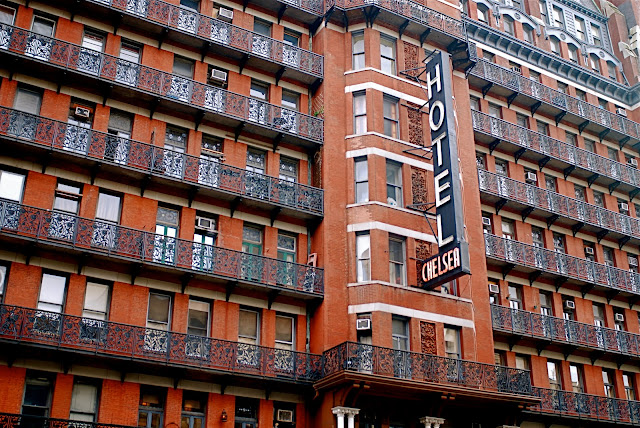 The Hotel Chelsea, photo taken March 27, 2010
From the Hotel Celsea website:
The Hotel Chelsea is a world renowned residence for artists, musicians, writers, philosophers, and characters of the most singular and eccentric stripe which the imagination might conjure. In the Chelsea neighborhood of Manhattan, the hotel is located at 222 West 23rd Street, between Seventh and Eighth Avenues, near the Jacob K. Javits Center, Empire State Building, Midtown, Greenwich Village, and other NYC attractions. Built in 1883, the hotel welcomes guests, but is primarily known for its long-term residents, past and present. The hotel has always been a center of artistic and bohemian activity and it houses artwork created by many of the artists who have visited. The hotel was the first building to be listed by New York City as a cultural preservation site and historic building of note. The twelve-story red-brick building that now houses the Hotel Chelsea was built in 1883 as a private apartment cooperative that opened in 1884; it was the tallest building in New York until 1899. At the time Chelsea, and particularly the street on which the hotel was located, was the center of New York's Theater District. However, within a few years the combination of economic worries and the relocation of the theaters bankrupted the Chelsea cooperative. In 1905, the building was purchased and opened as a hotel.
Owing to its long list of famous guests and residents, the hotel has an ornate history, both as a birth place of creative modern art and home of bad behavior. Bob Dylan composed songs while staying at the Chelsea, and poets Allen Ginsberg and Gregory Corso chose it as a place for philosophical and intellectual exchange. It is also known as the place where the writer Dylan Thomas died of alcohol poisoning on in 1953, and where Sid Vicious of the Sex Pistols may have stabbed his girlfriend, Nancy Spungen, to death on October 12, 1978.
Famous visitors and residents of the Chelsea Hotel include Eugene O'Neil, Thomas Wolfe, and Arthur C. Clarke (who wrote 2001: A Space Oddyssey while in residence). Janis Joplin, Leonard Cohen, Bob Dylan, Jimi Hendrix, and the Grateful Dead passed through the hotels doors in the 1960s.
Virgil Thompson, Larry Rivers, William Burroughs, Willem de Kooning, Jasper Johns, Patti Smith, Arthur Miller, Dylan Thomas, and many, many others stayed here too.
Posted by Noel Y. C. at 5:01 PM

Hey! Beautiful Pics!
I'd love to use one for a report about NYC's music. Could you Could you give me permission? Could you mail me and I explain some more to you?
Thank you! santodealer@gmail.com

Hello,
i'm emmanuel,
french composer and producer,
i like your pics and i would like to use one for a track i made called 'chelsea hotel".
I made this after watching the Abel Ferrara's documentary.
You can post your answer at
weda@orange.fr
Thank you.

asleep at the chelsea - composed at the Chelsea and performed by Bees Deluxe audio at http://www.earbits.com/s/Bfi0haS7CDRqBD