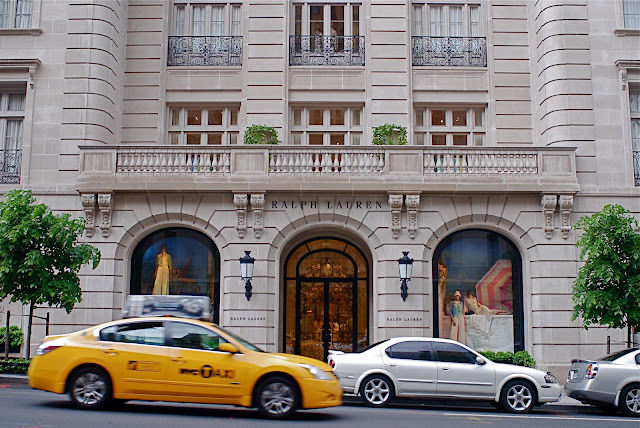 The "old" Ralph Lauren flagship store on the southeast corner of Madison Avenue and 72nd Street was designed by Kimball & Thompson. It was commissioned in 1895 in 16th Century French chateau style for Gertrude Rhinelander Waldo. The architecture mimics its French prototypes, combining late Gothic and early Renaissance motifs, including statues of a monk, a knight, and other medieval personnages ensconced in second-story niches, and a roofline with projecting dormers, finials, and chimneys. The house was transformed into the flagship Ralph Lauren shop in 1986.

On October 15, 2010, the new Ralph Lauren store on the southwest corner of Madison Avenue and 72nd Street opened. The ground-floor facades have very large, shop windows and very handsome, recessed, arched glass doors. The trio of arches on 72nd Street are repeated, minus the four-step entrance, on the avenue frontage where it is flanked by very large rectangular shop windows. The 72nd Street facade has a very handsome protruding, balustrated balcony while the average frontage is recessed above the arches with a balustrated terrace. Both frontages have lighting sconces and sidewalk landscaping. The facades are limestone and the lower three floors are rusticated. (Source: The City Review)
Posted by Noel Y. C. at 9:27 PM