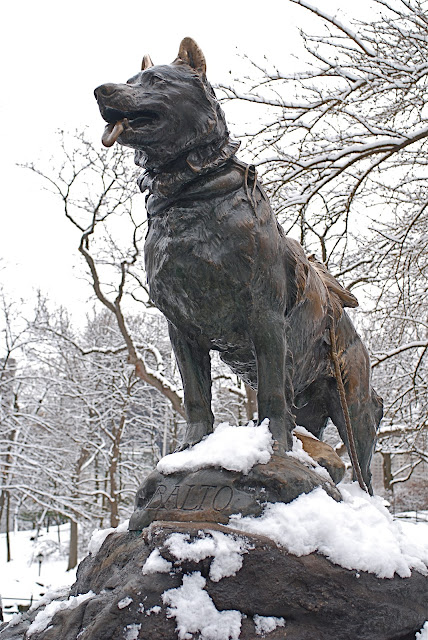 One of the most popular statues in Central Park is that of Balto, the Siberian Husky sled dog standing nobly on a rock outcropping. The statue is located west of East Drive and 67th Street and north of the Zoo. This image was made last winter.
Back in 1925 Nome, Alaska was stricken with a horrific diphtheria outbreak. Not enough antitoxin was available to treat all the sick until teams of mushers and sled dogs battled a blinding blizzard and traveled 674 miles to deliver the medicine. Balto was one of the heroic lead dogs.
In recognition of such bravery, the famed Brooklyn born sculptor Frederick George Richard Roth was commissioned to create a lasting tribute.
Roth, whose other work at Park includes Tales of Mother Goose andDancing Goat and Dancing Bear, unveiled the statue on December 16, 1925. The most important among the honored guests was the real Balto himself.
Over the past nine decades, Balto’s statue has been a favorite as evidenced by the deep burnishing of his ears and back. Children and others frequently climb up on him for a photo opp, or to contemplate life and the stirring words on the statue’s plaque: Endurance · Fidelity · Intelligence. Good words for today's heroes and heroines too. (Information from Central Park website).
Posted by Noel Y. C. at 4:34 AM