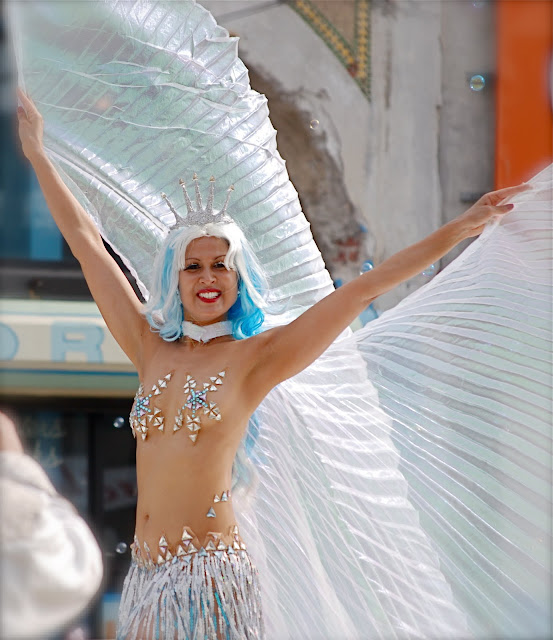 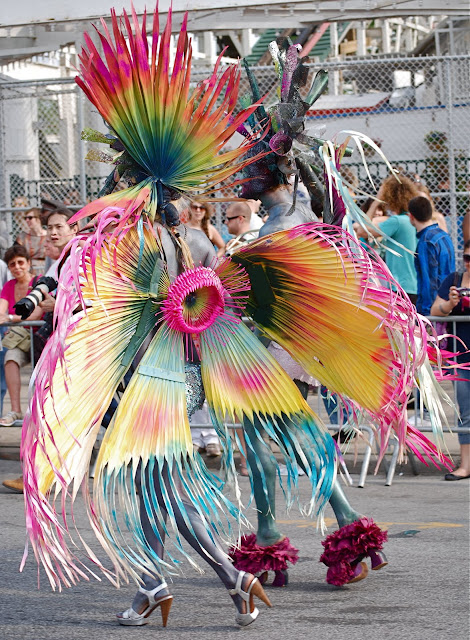 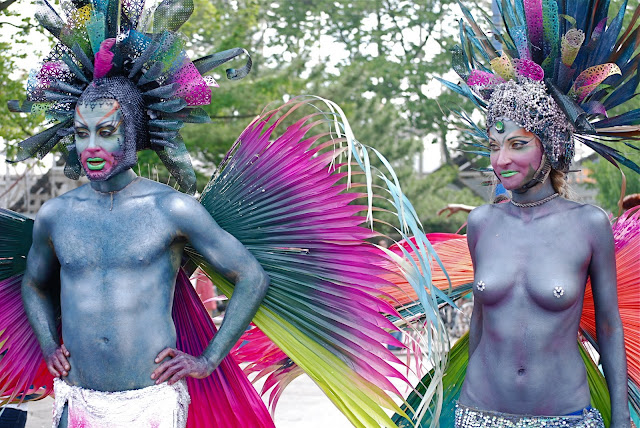 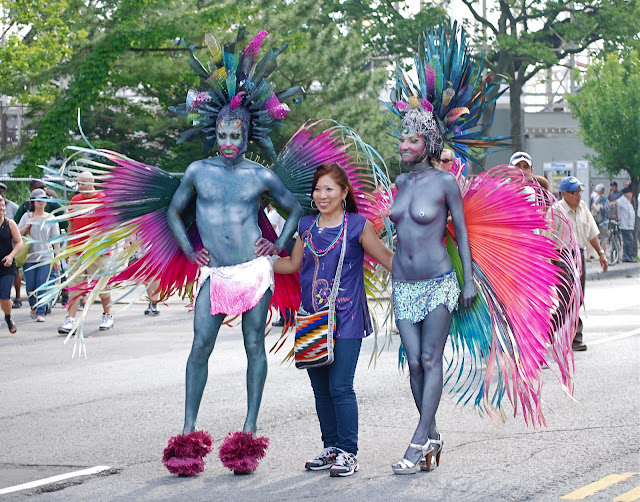 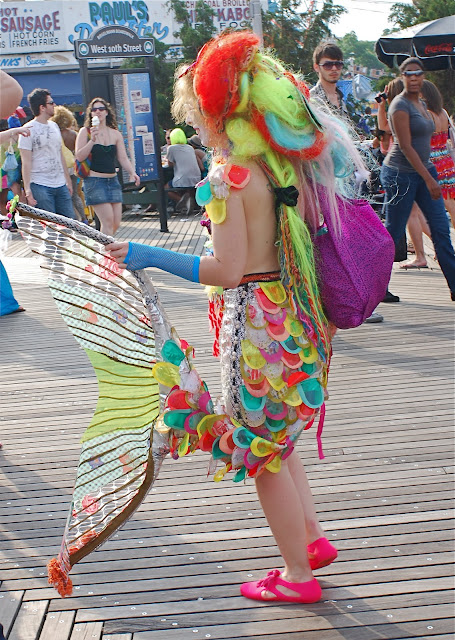 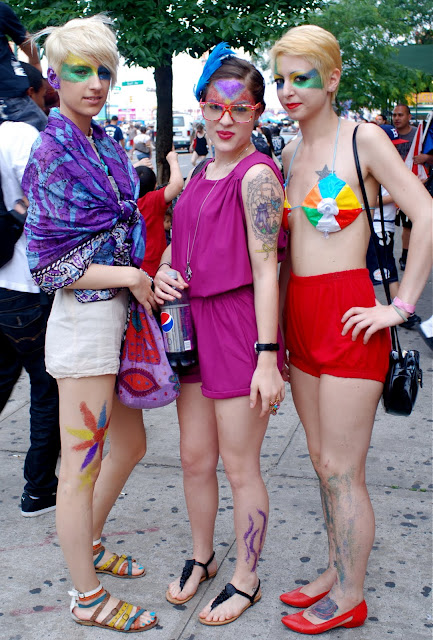 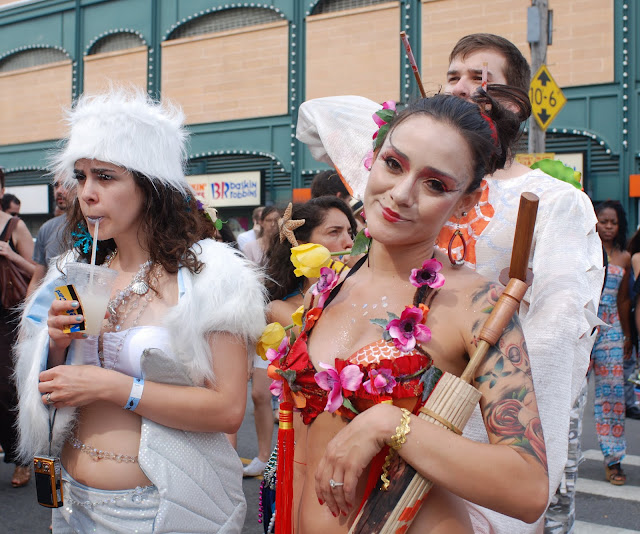 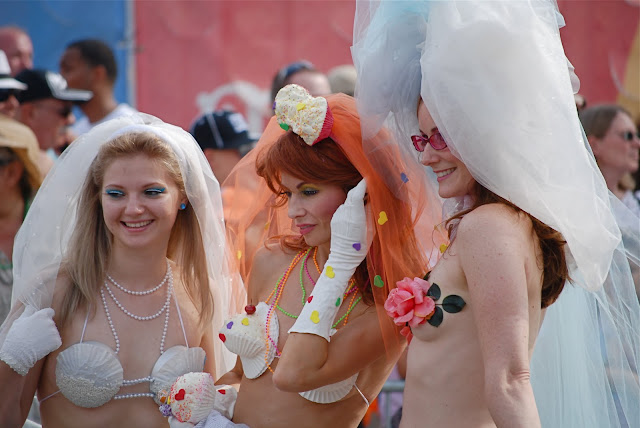 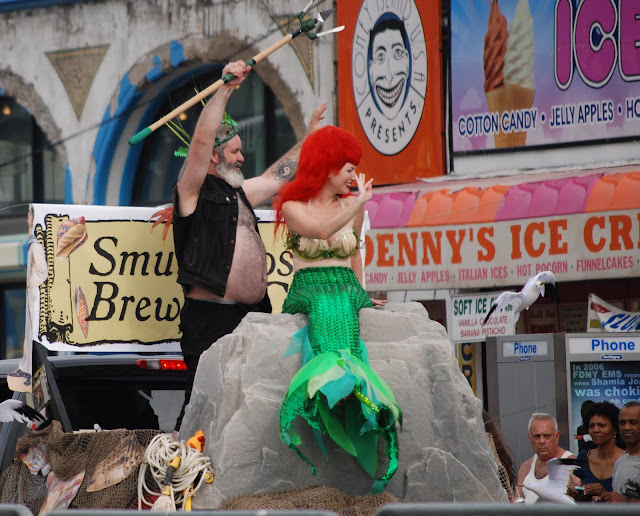 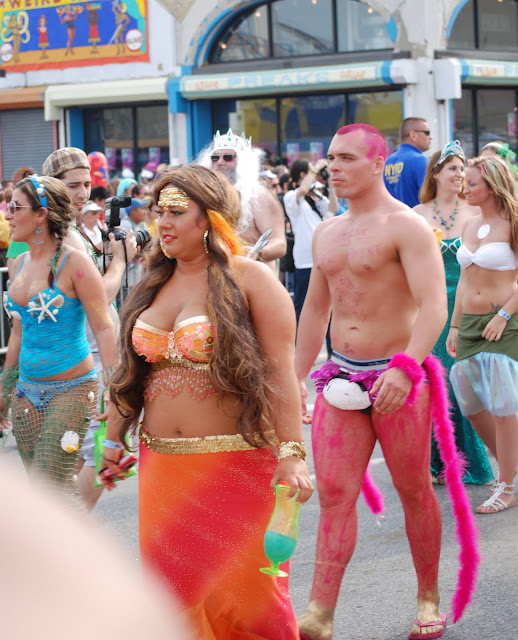 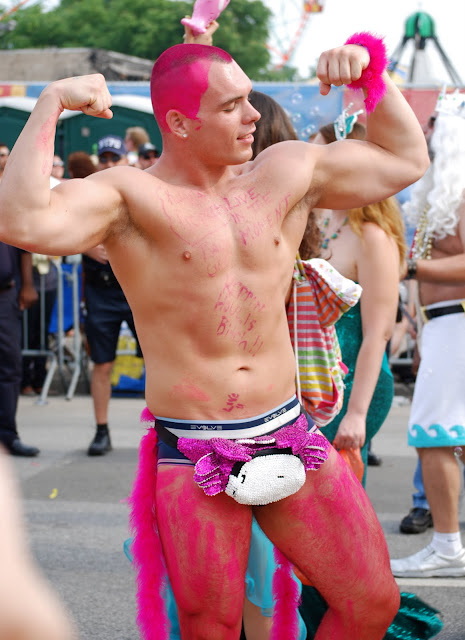 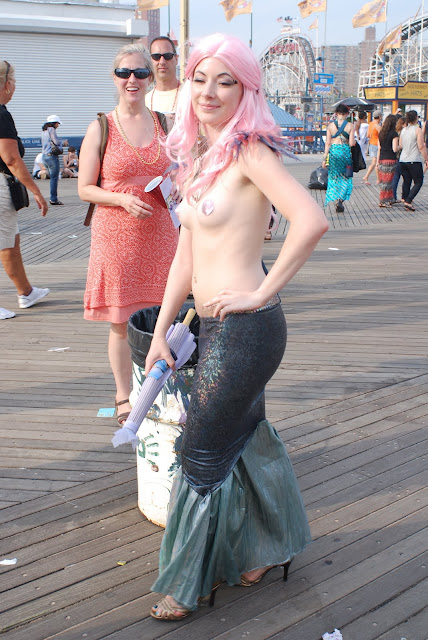 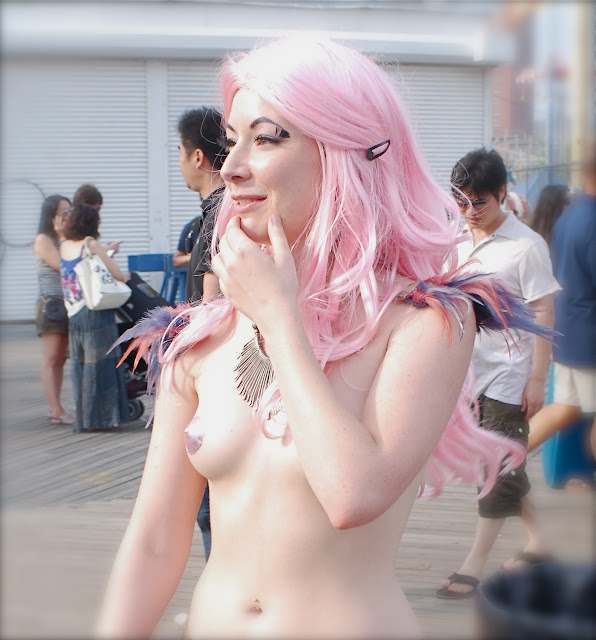 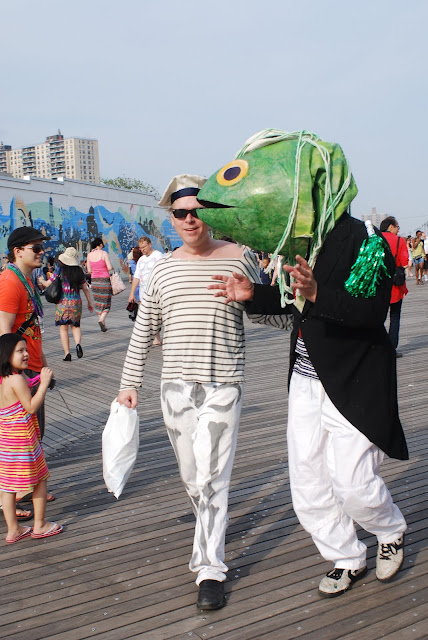 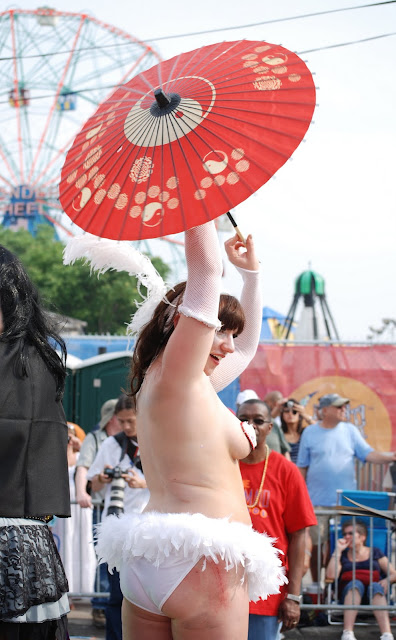 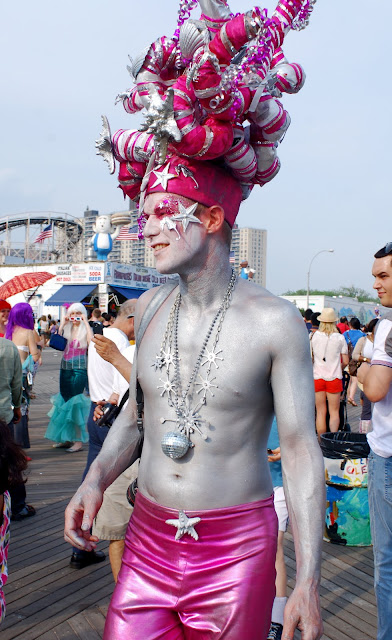 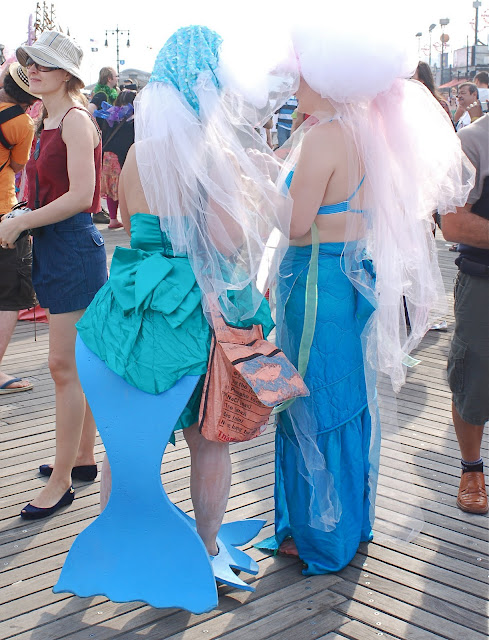 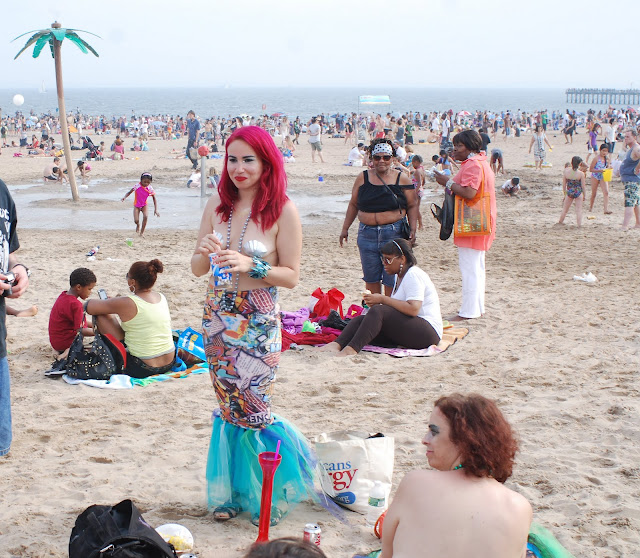 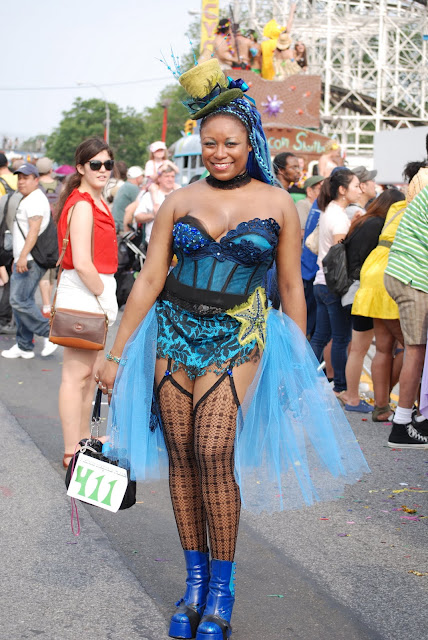 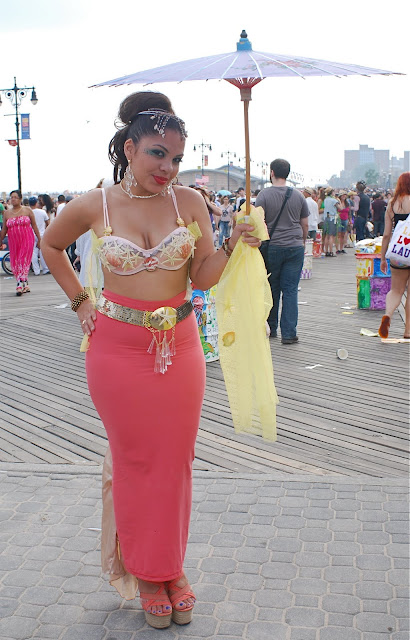 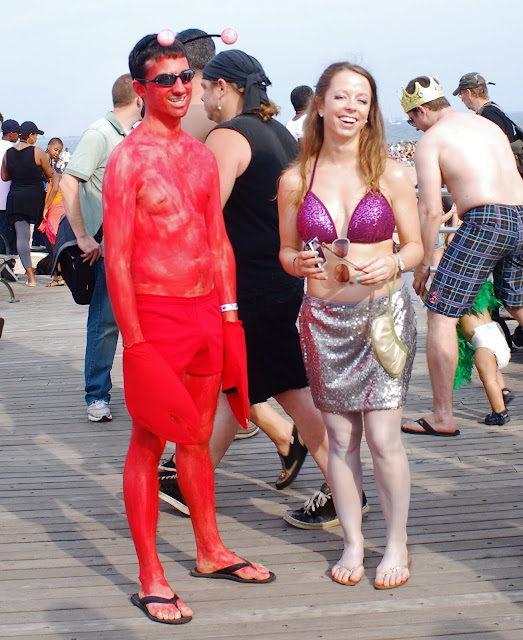 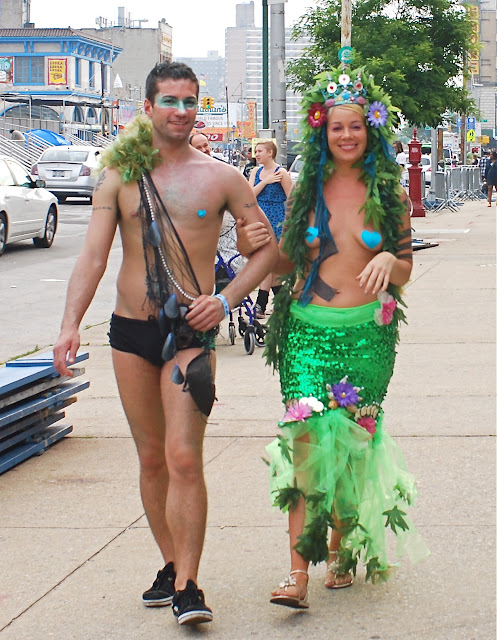 Marking the unofficial start of summer on Coney Island in Brooklyn is the annual  Mermaid Parade that took place earlier this afternoon. I made these images of some of the colorful and outrageous costumes at the parade that pays homage to Coney Island's Mardi Gras which lasted from 1903 to 1954.
From the Mermaid Parade website:
About The Mermaid Parade
A completely original creation of Coney Island USA, the Mermaid Parade is the nation's largest art parade and one of New York City's greatest summer events. The parade is proud to have some incredible sponsors. Click here for answers to common questions.
Founded in 1983 by Coney Island USA, the not-for-profit arts organization that also produces the Coney island Circus Sideshow, the Mermaid Parade pays homage to Coney Island's forgotten Mardi Gras which lasted from 1903 to 1954, and draws from a host of other sources resulting in a wonderful and wacky event that is unique to Coney Island. The Mermaid Parade celebrates the sand, the sea, the salt air and the beginning of summer, as well as the history and mythology of Coney Island, Coney Island pride, and artistic self-expression. The Parade is characterized by participants dressed in hand-made costumes as Mermaids, Neptunes, various sea creatures, the occasional wandering lighthouse, Coney Island post card or amusement ride, as well as antique cars, marching bands, drill teams, and the odd yacht pulled on flatbed.
Each year, a different celebrity King Neptune and Queen Mermaid rule over the proceedings, riding in the Parade and assisting in the opening of the Ocean for the summer swimming season by marching down the Beach from the Boardwalk, cutting through Ribbons representing the seasons, and tossing fruit into the Atlantic to appease the Sea Gods. In the past, David Byrne, Lou Reed, Laurie Anderson, Queen Latifah, Ron Kuby, Curtis Sliwa, Moby, David Johansen and Harvey Keitel have graced our shores, presiding over the assembled masses.
The Parade is followed by the Mermaid Parade Ball, a post-parade gathering where costumed parade participants can get together with each other and parade spectators to listen to live music, enjoy cocktails and watch burlesque and sideshow acts performed by some of New York City's hottest performers.
Posted by Noel Y. C. at 9:36 PM