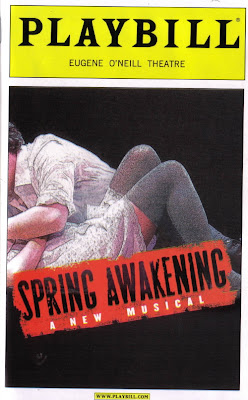 Last Wednesday night, I went to see SPRING AWAKENING, the most Tony nominated Broadway show this season. Based on Frank Wedekind's masterpiece “The Awakening of Spring”, Spring Awakening tells the story of how a dozen young people in a provincial German town in the 1890s make their way through the exciting, complicated, confusing and mysterious time of their sexual awakening. The story centers around a brilliant young student named Melchior, his troubled friend Moritz, and Wendla, a beautiful young girl on the verge of womanhood. Lea Michele and Jonathan Groff star as teens Wendla and Melchior, respectively who are drawn to each other in a world where parents, ministers and teachers create an atmosphere of shame, silence and ignorance. Both actors were wonderful in this musical. John Gallagher Jr. plays Moritz and his performance is outstanding. He effectively expresses his inner confusion and frustrations. The music and lyrics by Duncan Sheik and Steven Sater features songs that illuminate the urgency of adolescent self-discovery, the burning intensity of teen friendships and the innate suspicion of the uncomprehending adult world. The musical reminded me of RENT, and has its own cult following.

From the New York Times:

“As that daring sequence suggests, Mr. Sater, who wrote the book and lyrics, remains faithful to the play’s awareness that the discovery of sex can carry in its heady wake both salvation and destruction, particularly when it is coupled with ignorance. Mr. Sheik’s music, spare in its simple orchestrations, lush in the lapping reach of its seductive choruses, embodies the shadowy air of longing that infuses the show, the excitement shading into fear, the joy that comes with a chaser of despair. The singing throughout is impassioned and affecting, giving powerful voice to the blend of melancholy and hope in the songs.

For the characters’ confusions are ultimately not sexual but existential too. Sex is a central expression of life’s mystery, and a metaphor for it too. But the awakening really taking place in “Spring Awakening” is to something larger than the insistent needs of the flesh. Mr. Sater and Mr. Sheik’s angst-riddled teenagers are growing into a new awareness of “the bitch of living” itself. And the beauty of living too.”