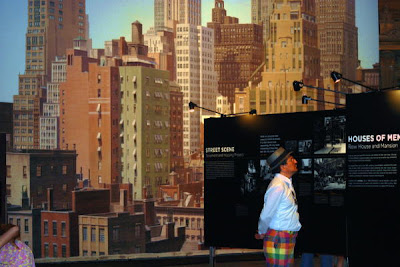 CELLULOID SKYLINE: NEW YORK AND THE MOVIES is a spectacular multi-media exhibit that will bring to life the glittering cinematic metropolis of “movie New York.” The free, four-week exhibit, based on James Sanders’ award-winning book of the same name, opened in Vanderbilt Hall at the Grand Central Terminal last May 25 and will run through this month. “From the steel and concrete skyscrapers reaching towards the clouds to the glow of Broadway lights, from the gritty setting of a subway car to the grand lady standing in the harbor, New York is a truly magical place, and nowhere is that magic captured better than in the works of some of our finest filmmakers,” said Sanders. “This is not a conventional museum-style exhibit, but rather a vast, immersive, magical environment that allows people to walk into the ‘movie New York’ of their dreams.”

The exhibit combines immense urban views with digitally projected film clips and dramatic enlargements of more than 160 rare and unusual production stills. The imaginative displays capture the epic relationship between the real New York and its cinematic portrayal over the decades, beginning with the American film industry’s origins on the sidewalks of Manhattan more than a century ago. It will also look at the cinematic New York practically invented just for movies during Hollywood’s Golden Age in the ‘30s and ‘40s, as well as the more realistic vision provided by location shoots in the actual city from the late 1940s to the present.

Adding to the unique attraction of this exhibit are six “scenic backing” paintings used in such films as Alfred Hitchcock’s North by Northwest and Vincente Minnelli’s The Clock. These gigantic, meticulously rendered cityscapes, some more than 25 feet high and 60 feet long, have never been exhibited for the general public. Shown above is one of the pictures I made of one of the scenic backing (ca 1950) from MGM Studios depicting the skyline of midtown Manhattan.

Hi, Nice stuff. I found a cool news widget for our blogs at www.widgetmate.com. Now I can show the latest news on my blog. Worked like a breeze.