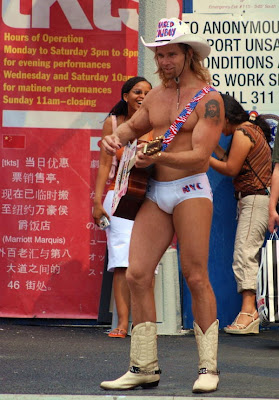 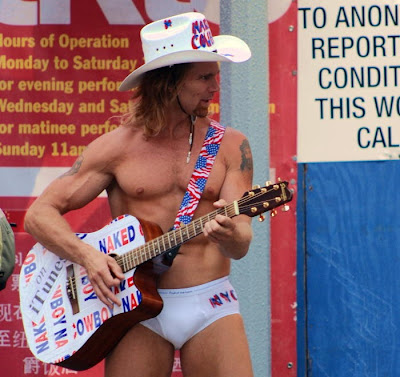 He is known as the “Naked Cowboy,” and he has become a prominent fixture and a must-see tourist attraction of Times Square. He plays his guitar wearing only cowboy boots, a white cowboy hat, and a pair of white briefs. His hat, guitar and briefs have “Naked Cowboy” and "NYC" printed on them, and he sells these items online.

Doug Wagner writes:
“The Naked Cowboy is able to reminisce upon two births, really. One brought him into the world as a swaddling babe in Cincinnati, Ohio, where he grew up, studied at the University of Cincinnati, and tried his hand at professional modeling, dancing and bodybuilding. The other transpired on a sunny morning in Venice Beach, when after an unsuccessful stint of playing guitar on the boardwalk fully clothed, he took the advice of a friend and stripped to his undies before strumming away. It was then that the Naked Cowboy was born.

Every moment thereafter has been an inspired step in Burck’s self-avowed journey of “dominating the commercial landscape of the entire world.” Armed only with his boots, hat, guitar and briefs, the Naked Cowboy has achieved mind-boggling success in his solitary campaign to market, promote and sell the most personal of commodities: himself. His purely self-generated fame has landed the Naked Cowboy appearances around the globe, in print, on radio, and on shows like The David Letterman Show, The Today Show, Good Morning America, MTV’s Total Request Live, and the Disney Channel. He’s graced the televisions of viewers in Japan, Korea, Germany, China, Brazil, Italy and South Africa. He’s strummed scantily alongside Mary Kate and Ashley Olsen in the film “New York Minute.” He’s done interviews and photo-shoots for magazines including Paper, Gotham, People, YM and FHM. He’s been seen by millions in commercials for products including M&M’s, AOL, the Olympics and Pepsi (the last in a spot directed by Spike Lee that aired during the Oscars.) The likes of Dave Matthews, Donald Trump, and Sponge Bob Square Pants have all retained his services at one time or another.

Far more than just a quirky New York icon, the Naked Cowboy has endeared himself to millions with his trademark stark entertainment. His idiosyncratic life philosophy, in which he aligns himself with thinkers as diverse as Christ, Buddha, Copernicus, Tony Robbins and many more, is outlined in multiple self-published manifestos, found on his website, www.nakedcowboy.com. The Naked Cowboy, however, makes very clear that his astounding success is owing to no one but himself.

Next up for the Naked Cowboy is a slot promoting the 2006 New York City Half Marathon on behalf of Nike, on August 27. He is also currently hard at work on an album with 4Sight Music Productions, whose tracks will be infused with rock, dance, pop, blues, hip-hop, Latin, and, yes, a healthy dose of nakedness.

What to glean from the breakout success of a man, his guitar and his skivvies? Only that when conquering the world, the best ambition is naked.”
Posted by Noel Y. C. at 6:00 PM