Sculpture of RICHARD SERRA at the MUSEUM OF MODERN ART 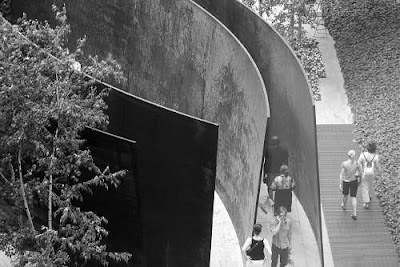 A retrospective of 40 years of sculptor RICHARD SERRA’s work recently opened at the Museum of Modern Art. I made this photograph of “Intersection II”, an open, upright sandwich of four weatherproof steel, almost identical conical sections, tilting this way and that along three routes of passage. The plates are just low enough to allow for the sky to remain visible (and for the viewer not to feel claustrophobic), and high enough to make a significant impact. This piece is installed in the Abby Aldrich Rockefeller Sculpture Garden. Born in San Francisco, California in 1939, Serra has long been acclaimed for his innovative work which emphasizes materiality and engagement of the object with the viewer and the site. He focused recently on large-scale sculpture using industrial materials.

"Richard Serra’s mostly magnificent retrospective at the Museum of Modern Art (MOMA) proves that he is not only our greatest sculptor but an artist whose subject is greatness befitting our time. I have in mind the show’s climactic sections…" by Peter Schjeldahl
Posted by Noel Y. C. at 3:07 PM