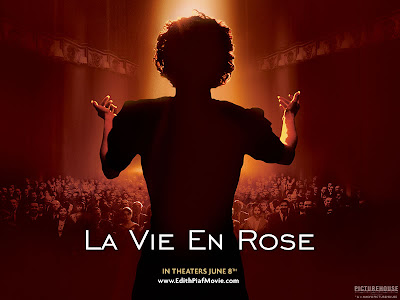 Above is an image of the poster for a wonderful movie that I saw last night at the Paris Theatre on 58th Street just off 5th Avenue. It's called "LA VIE EN ROSE," about an emotional journey of the French singer EDITH PIAF. Aside from the intense, powerful but tragic life story, the impeccable performance by MARION COTILLARD makes this movie one of the best I've seen this year.

From the New York Times:

Marion Cotillard’s feral portrait of the French singer Édith Piaf as a captive wild animal hurling herself at the bars of her cage is the most astonishing immersion of one performer into the body and soul of another I’ve ever encountered in a film. Her portrayal of Piaf, plucked from the streets of Paris and molded into a music hall legend, ignites Olivier Dahan’s screen biography “La Vie en Rose,” which opens the Film Society of Lincoln Center’s annual Rendez-Vous With French Cinema series this evening at Alice Tully Hall.

Piaf, who died in 1963 at 47, a casualty of morphine and alcohol addiction, was a ragamuffin Gallic fusion of Billie Holiday and Judy Garland, but fiercer than either. Ms. Cotillard’s Piaf ages shockingly, from a famished alley cat ravenously slurping up life to a stooped, feeble wreck whose dyed red hair is falling out. It is an entirely convincing portrait of instinctive genius and raw life force wedded to self-destruction.

Held together by the intensity of Ms. Cotillard’s performance, “La Vie en Rose,” which opens commercially in New York and Los Angeles on June 8, is the most memorable of this year’s Rendez-Vous series of 17 films (including one documentary), which runs through March 11. It continues an expansion that began last year, when Rendez-Vous began showing films at the in , as well as at the Walter Reade Theater at Lincoln Center.

Leaping around in time, “La Vie en Rose,” like the life it remembers, is a chaotic jumble in which Piaf’s original recordings, embellished with new studio orchestrations, are impeccably lip-synched by the star. The glossy 140-minute film does not sentimentalize its subject until the end, when it jarringly injects a “rosebud” moment from the singer’s past.