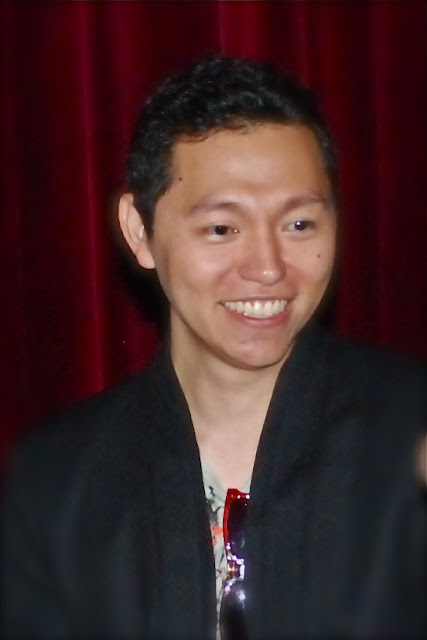 The critically acclaimed Filipino independent film "Aparisyon" (Apparition) starring Jodi Sta. Maria and Mylene Dizon had its New York premiere last night at The Museum of Modern Art (MoMA). Also in the cast are Fides Cuyugan-Asensio and Raquel Villavicencio. The film is directed by Vincent Sandoval (pictured above after the screening at MoMA) who introduced the film and answered questions from the audience after the screening. Set in the early '70s this brilliant, provocative, powerful and beautifully shot psychological movie was well-received by the audience. Sandoval is a New York-based Filipino-American filmmaker/actor. "Aparisyon" screens through July 15 as the July feature for MoMA’s ContemporAsian series, a monthly exhibition of critically-acclaimed contemporary Asian movies.
Below is a synopsis of “Aparisyon” from MoMA’s programme:
The chaos leading up to Ferdinand Marcos’s 1972 declaration of martial law is palpable even within the cloistered walls of Adoration—a convent nestled in a lush forest outside of Manila. Eluding the careful watch of Mother Superior, doe-eyed newcomer Sister Lourdes begins attending political rallies in secret with Sister Remy, a young nun suffering a crisis of faith in the wake of her brother’s protest-related disappearance. Pitting prayer against political action, guilt against sin, Apparition (‘Aparisyon’) explores the repercussions of (mis)interpreting the actions of men as the will of God.
Posted by Noel Y. C. at 3:33 AM

HOW TO INSTALL PHILIPPINES TV ON IPHONE AND IPOD TOUCH? CLICK HERE

or visit Android and Apple APPS

LIKE US ON NEW FB PINOY HD MOVIE UPDATE