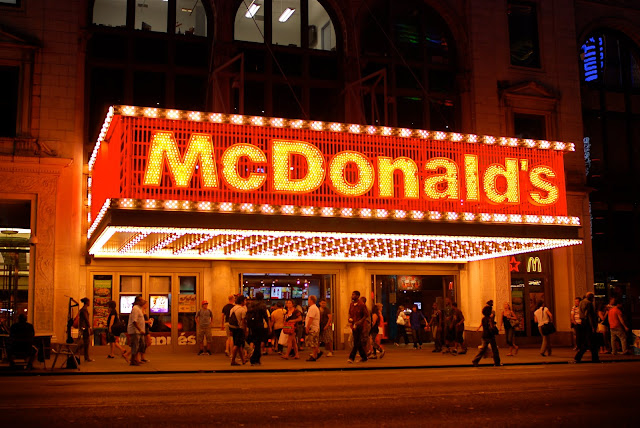 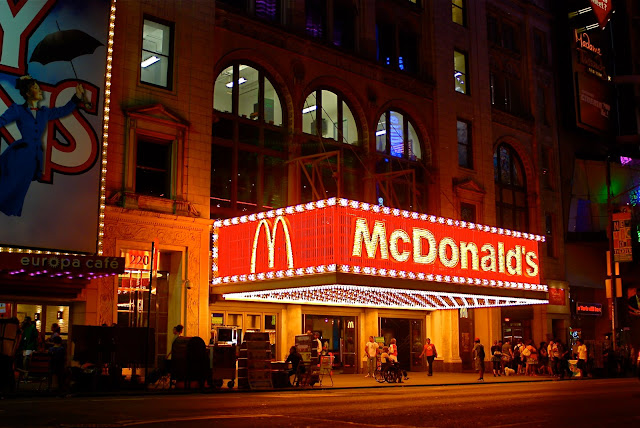 The largest metropolitan McDonald's restaurant in America is located at the center of New York's tourism and entertainment district -- Broadway & 42nd Street. Blazing like the nearby movie palaces and Broadway theatres, the 17,500-square-foot McDonald's restaurant is housed in the landmark Candler building. It features a full-length theatre marquee with 7,500 light bulbs, eighteen 42-inch plasma screens and twenty-seven 15-inch monitors to entertain customers. Interior designer Charles Morris Mount created a theatre "backstage" ambiance for the restaurant's interior decor by using original exposed brick and  authentic theatrical light fixtures. Mr. Mount once joked that the marquee lights pictured above are so bright that they could cause sunburn.

Born in Andalusia, Alabama on March 6, 1942, Mr. Mount liked using colors, neon, metal finishes, stainless steel and raw steel in his designs. He learned all about the local cuisine, later applying his knowledge to designing barbecue restaurants. He majored in interior design at Auburn University. After he graduated, his mother gave him a one-way ticket to France on the Queen Mary, telling him to "have a good time and find your way back." He went to Atlanta, where he worked in design until a friend convinced him that his opportunities would be greater in Manhattan. One of his early jobs was with the well-known furniture designer George Nelson. Mr. Mount opened his own firm in the early 1970's. He became known as a rule breaker with a distinctive style. Ruth Reichl, restaurant critic of The New York Times, said his 1995 redesign made the Gloucester House restaurant in Manhattan "a multimillion-dollar fun house of a restaurant." Mr. Mount passed away in 2002 at the age of 60 (source: The New York Times).
Posted by Noel Y. C. at 4:09 AM